Being part of GuocoLand's "Modern" series, the developer looks set to deliver quality and luxury at a much more affordable price point in the Lentor precinct.

Lentor Modern will be the fourth biggest new launch project this year.

The market will expect it to do well after seeing units being snapped up fast at some of the earlier launches.

2022 has been an astounding year for the new launch property market.

The rate of homebuyers and investors snapping up units was literally unprecedented.

All of them sold more than 70 percent of their units available.

AMO Residence definitely tops the lot, having sold 98 percent of its units in just one day.

In recent years, there have been popular mega projects such as Avenue South Residence and Normanton Park.

None of them was close to selling 50 percent of its total units even during the first month of launch.

Lentor Modern is located within a new township that is under development, whereas the earlier ones launch this year are located in more established housing estates or neighborhoods. Hence, plenty of market watchers will likely doubt that it can draw the same level of demand.

In this article, we will take an in-depth look at Lentor Modern and see if it’s actually a good buy in 2022.

In order to give you a quick understanding of Lentor Modern, here’s a quick overview and specifications of the project.

In addition, the following are some commonly asked questions about this new project next to the Lentor MRT station.

Lentor Modern is not a freehold development.

Instead, it is on a 99-year leasehold tenure and it was acquired through the Government Land Sales (GLS) programme in July 2021.

What District is Lentor Modern in?

The Lentor MRT station (TE5) is already in operation since 28 August 2021.

It’s situated along the new Thomson-East Coast MRT Line (TEL) and is expected to be complete by 2025.

Since Lentor Modern will TOP by the end of 2026, residents will get to enjoy its full convenience by then.

The property developer of Lentor Modern is none other than GuocoLand.

It is one of the biggest and most reputable property developers in Singapore.

In fact, the developer is the local real estate arm of Hong Leong Group – which owns over $40 billion worth of assets globally.

Established in 1968, Hong Leong Group has 14 listed companies under its belt, across various sectors such as finance, manufacturing, real estate, and distribution.

It is also listed on numerous stock exchanges across Asia and Europe.

You can see that most of their projects in recent years all belong to the high-end luxury segment.

Hence, homebuyers or investors can rest assured of the quality that GuocoLand is capable of delivering.

Lentor Modern is located along Lentor Central and it’s within District 26 of Singapore.

It is adjacent to the Thomson Grove condominium and the Lentor MRT station (TE5). 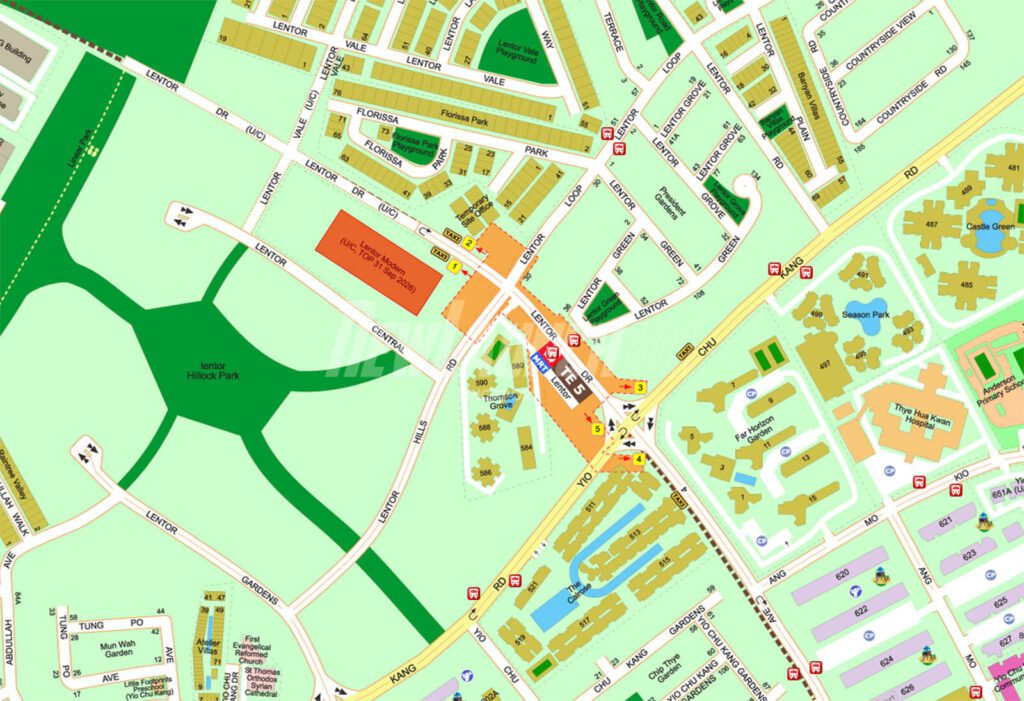 This new launch at Lentor will be the first of many more developments to come as the government plans to develop a new township surrounding Lentor Hillock Park.

Here are some of the key features of this project.

This is probably the most important and most noticeable “selling point” of Lentor Modern.

There is a good chance that it tops the checklist for most homebuyers or investors when comes to buying a property in Singapore.

As you can see from the map above, Lentor Modern will be connected via Exit 1 of the Lentor MRT Station.

That is to say, your path from the condominium to the MRT station will be entirely sheltered from any sort of weather conditions. 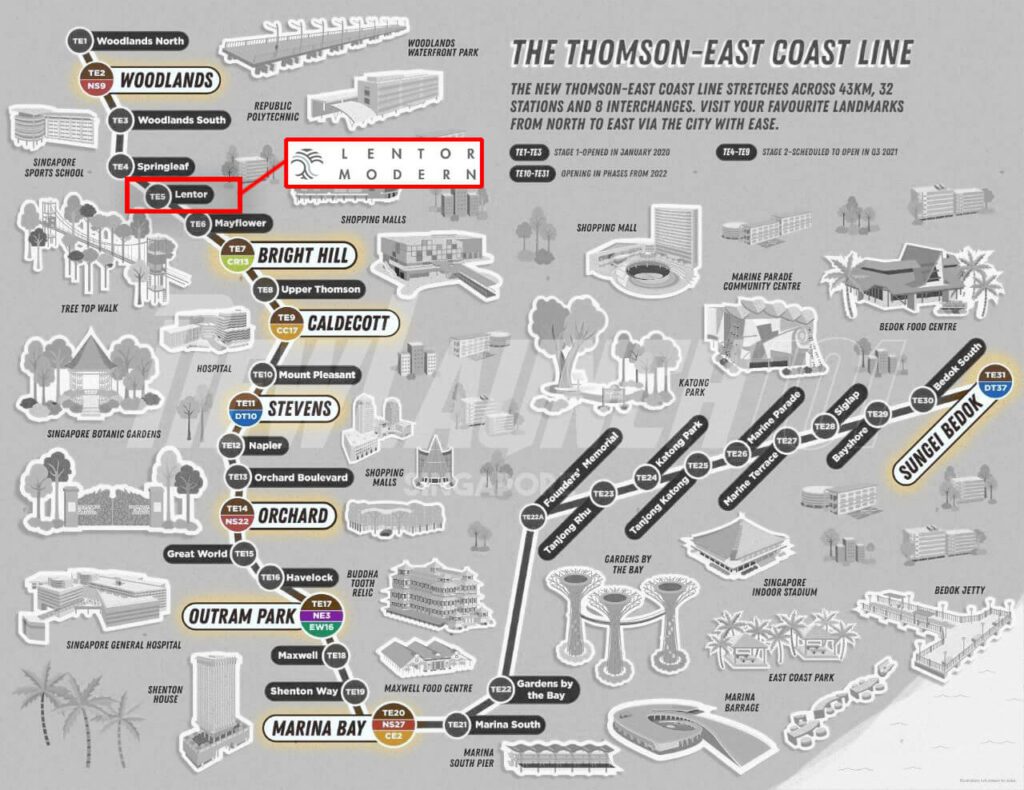 If you are still unfamiliar with the new Thomson-East Coast MRT line, Lentor MRT station is about 9 to 15 MRT stops away from the city center.

For instance, an estimated train ride of around 25 minutes will take commuters to Orchard Road; 30 minutes to Shenton Way and Marina Bay.

In addition, you will find various interchange stations along the Thomson-East MRT Line. It certainly makes commuting around Singapore a breeze via the MRT.

Convenience at your doorstep (literally)

When looking at the Lentor precinct, many would immediately find it a hassle when staying in this area.

At this point, there aren’t many established eateries around, and not a single supermarket within a 500-metre radius.

However, GuocoLand has addressed this.

Being a mixed-use development, Lentor Modern will have more than 96,000 square feet of commercial spaces on the 1st floor. 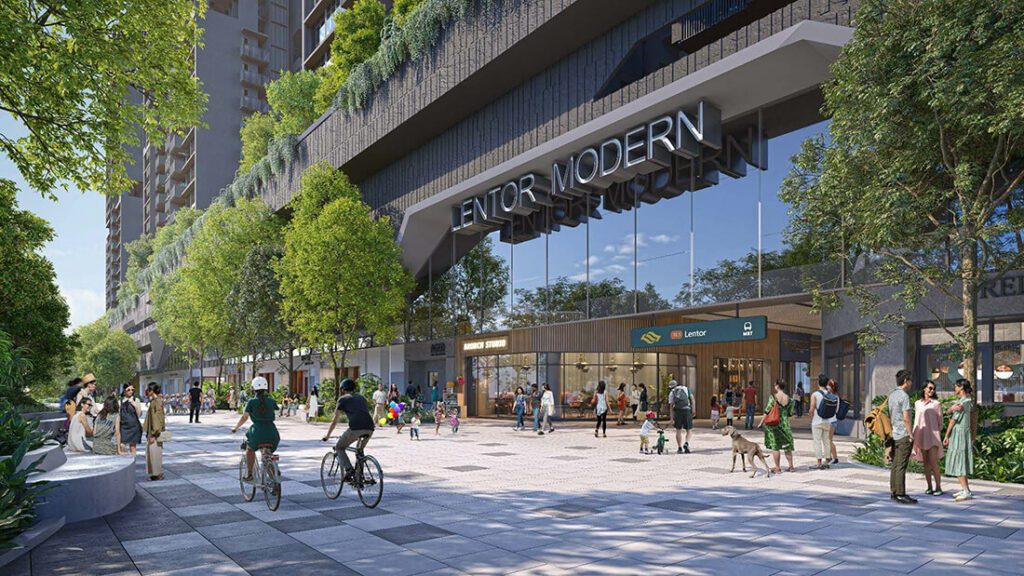 There is a good chance that the remaining 74,000 square feet (approximately) would be allocated to other commercial types, such as F&B or retail.

Most importantly, the tenant mix will be solely controlled by the developer or single management.

This would certainly ensure that patrons will get a broader selection of food, services, and retail options.

For the sake of comparison, the commercial space is significantly bigger than other similar types of projects launched in 2022.

On the other hand, Sky Eden only has 11,282 square feet of commercial space.

It has only 3 residential towers and each of them is 25-storey tall.

Here are the floor plans for Lentor Modern and the breakdown of the different unit types available within the development. 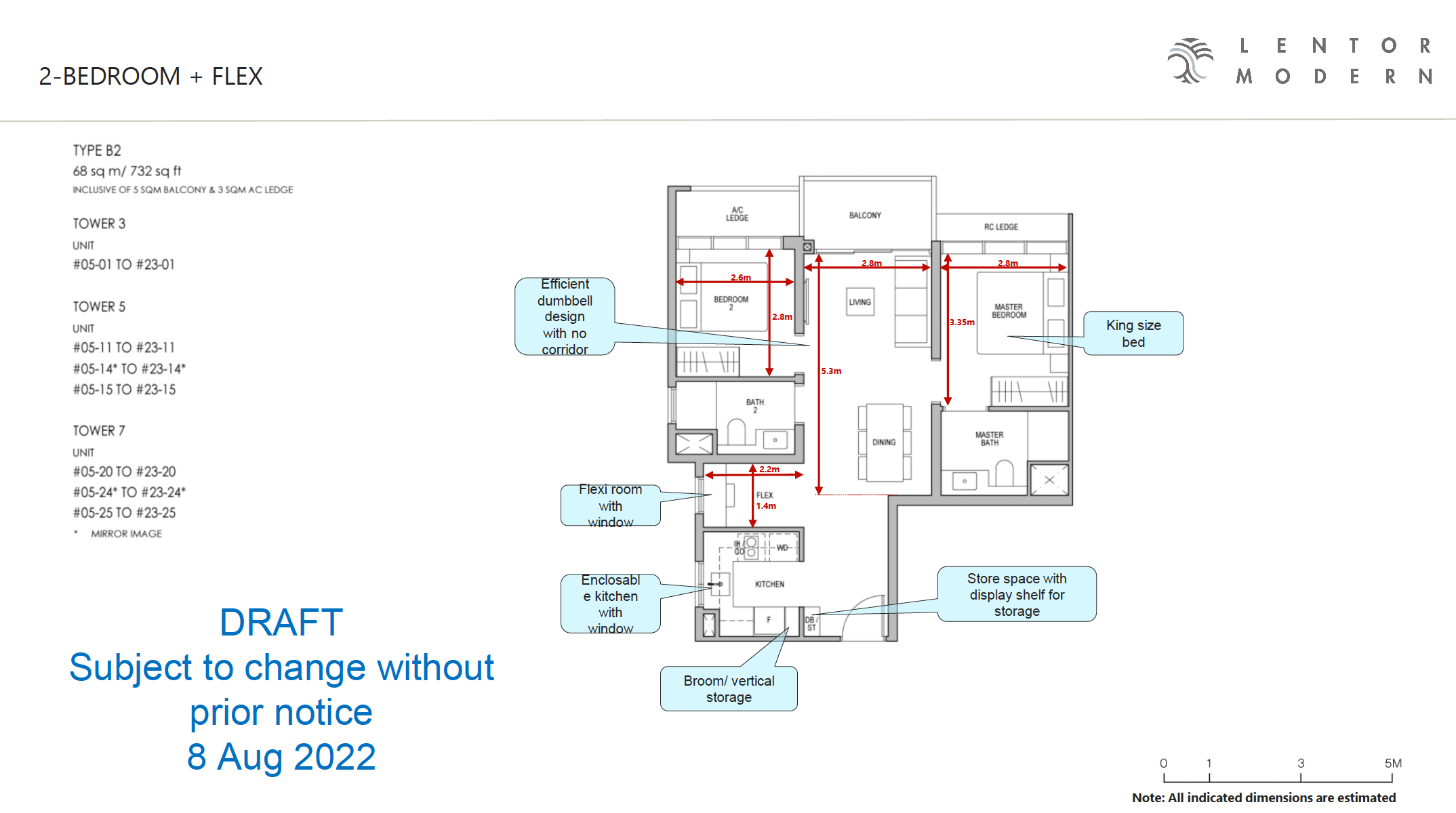 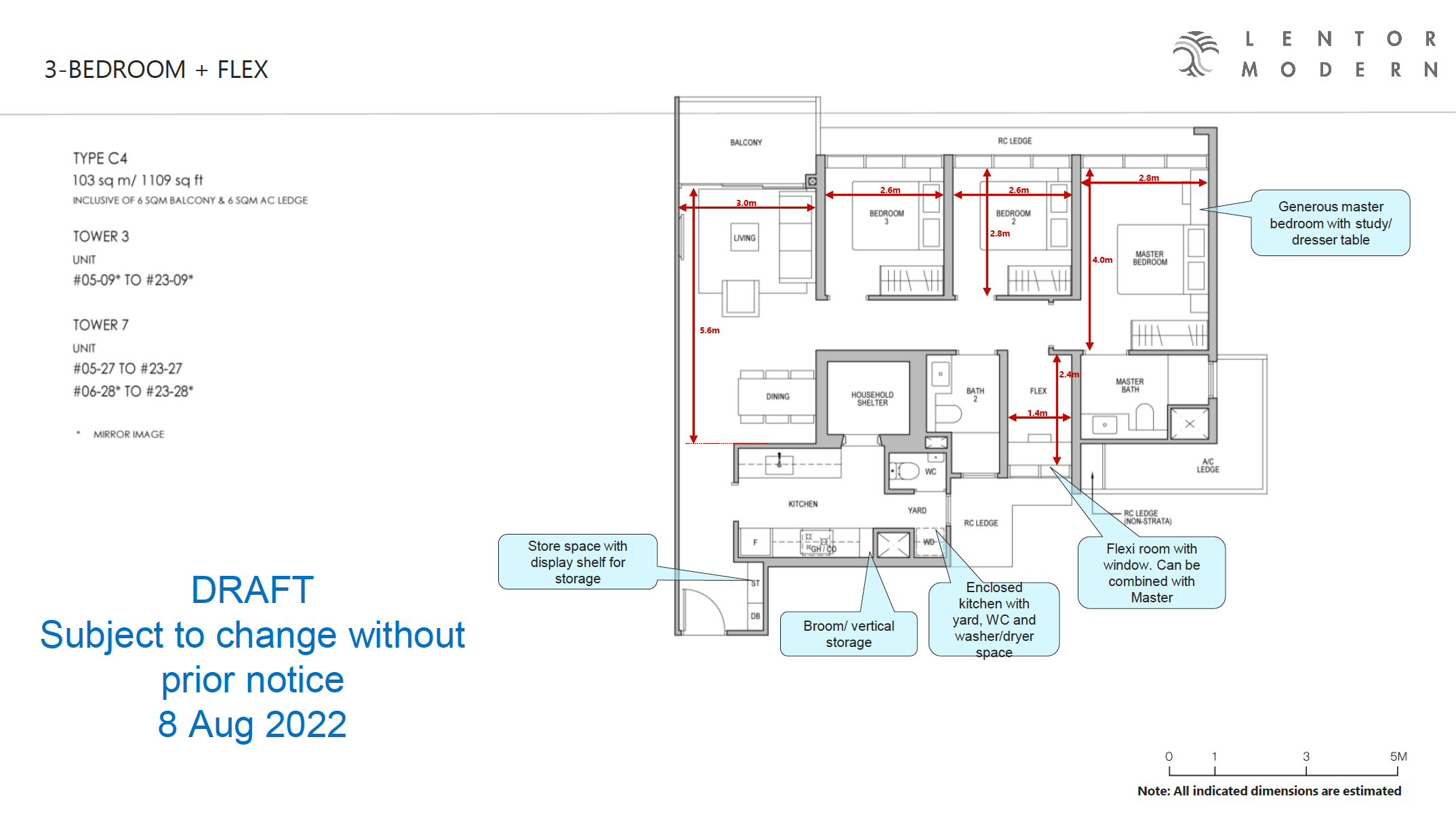 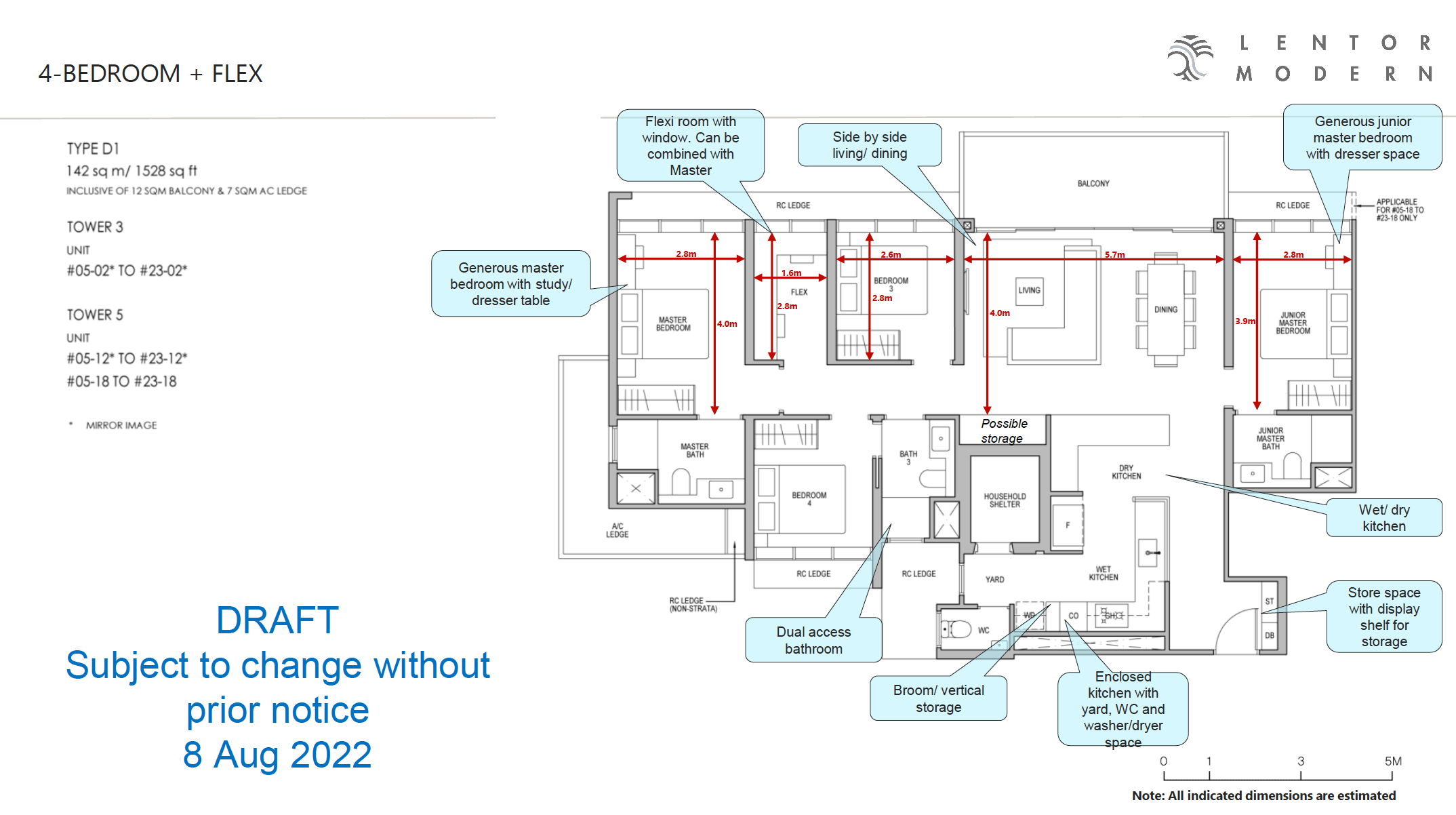 The Lentor Modern showflat is located along Lentor Hills Road, adjacent to the Thomson Grove condominium.

At the time of writing this article, it hasn’t been officially launched yet. It’s expected to host its preview on the final weekend of August 2022, on the 27th and 28th. 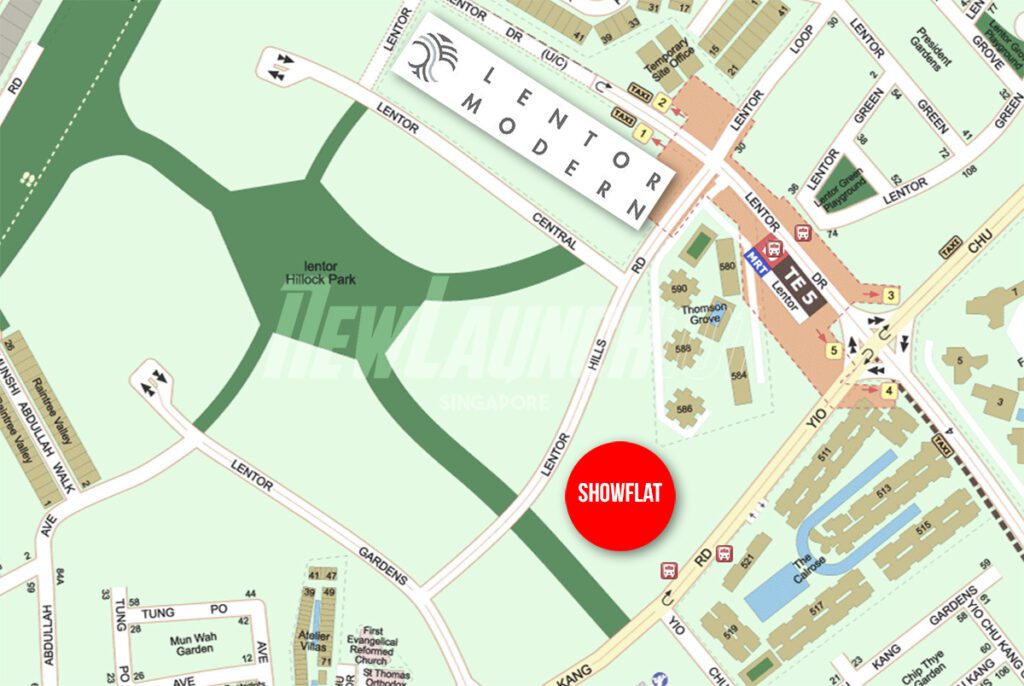 In addition, the developer has not announced the opening hours of the showflat.

However, if you are keen to attend the preview of this new launch at Lentor Central, please feel free to drop me a WhatsApp message to arrange an appointment.

I would really appreciate the support.

First of all, I would like to address the elephant in room — price.

It’s perhaps the biggest concern for most of you out there.

In 2022, homebuyers and investors have shown that they’ve accepted the new benchmark of home prices for new launch condo projects.

As a matter of fact, it started last year when units at Pasir Ris 8 were sold at close to $2,000 psf.

Thus, for Lentor Modern to be selling at slightly more than $2,000 psf after more than 1 year, I think it’s perfectly fair.

But why are prices moving so quickly over the last 1 – 2 years?

You don’t need to be an experienced analyst to know that this is largely due to the COVID-19 pandemic.

It has caused various issues — shortage of manpower in the construction industry, the rising cost of raw materials, and the lack of land supply in the market.

These factors have also contributed to the increased cost price for property developers when acquiring land plots for development.

Hence, it’s inevitable that this will be passed on to consumers — in this case, homebuyers and investors.

As you can see, the cost price for this Lentor Central site is already at $1,933 psf ppr.

Thus, it would almost impossible for GuocoLand to sell its units at anything lower than this.

It’s just not something property developers will want to do, especially for the big & reputable ones.

Apart from the plus points of having an MRT station connected and a supermarket just within the development, I am particularly excited about the product itself.

I’ve seen most of GuocoLand’s earlier projects in Singapore.

Honestly, they are some of the nicest and most well-designed residential developments.

They include the likes of Midtown Modern, Martin Modern, Meyer Mansion, Wallich Residence, and the number one on my list – Leedon Residence.

According to the developer, they will bring a similar quality and design to Lentor Modern.

Hence, they named it part of the “Modern” series.

And if that’s really the case, then it would be almost like living in a high-end luxury development but yet paying a lower price for it.

Many homebuyers and investors like yourself would think that having a nice property means nothing.

However, I have served enough tenants and resale homebuyers to share with you that it will mean something to them.

Some are even willing to pay top dollar for it.

The bad and the ugly

I wouldn’t say these are really bad points, but they are certainly legit concerns when comes to buying Lentor Modern.

First of all, It boasts of having that “first-mover” advantage.

As good as it sounds, it does come at a price … the price of peace!

There will be more developments coming up in the area.

That would mean residents in the area could possibly have to deal with construction noises, dust, and traffic congestion from time to time.

So it’s definitely something worthy to take note of.

Secondly, it also boasts of having a supermarket and huge commercial spaces to house various retail and F&B outlets.

But if you look at the URA Master Plan 2019, Lentor Modern is the only project that has a commercial element.

The rest are 100 percent residential, including the existing developments within the vicinity. 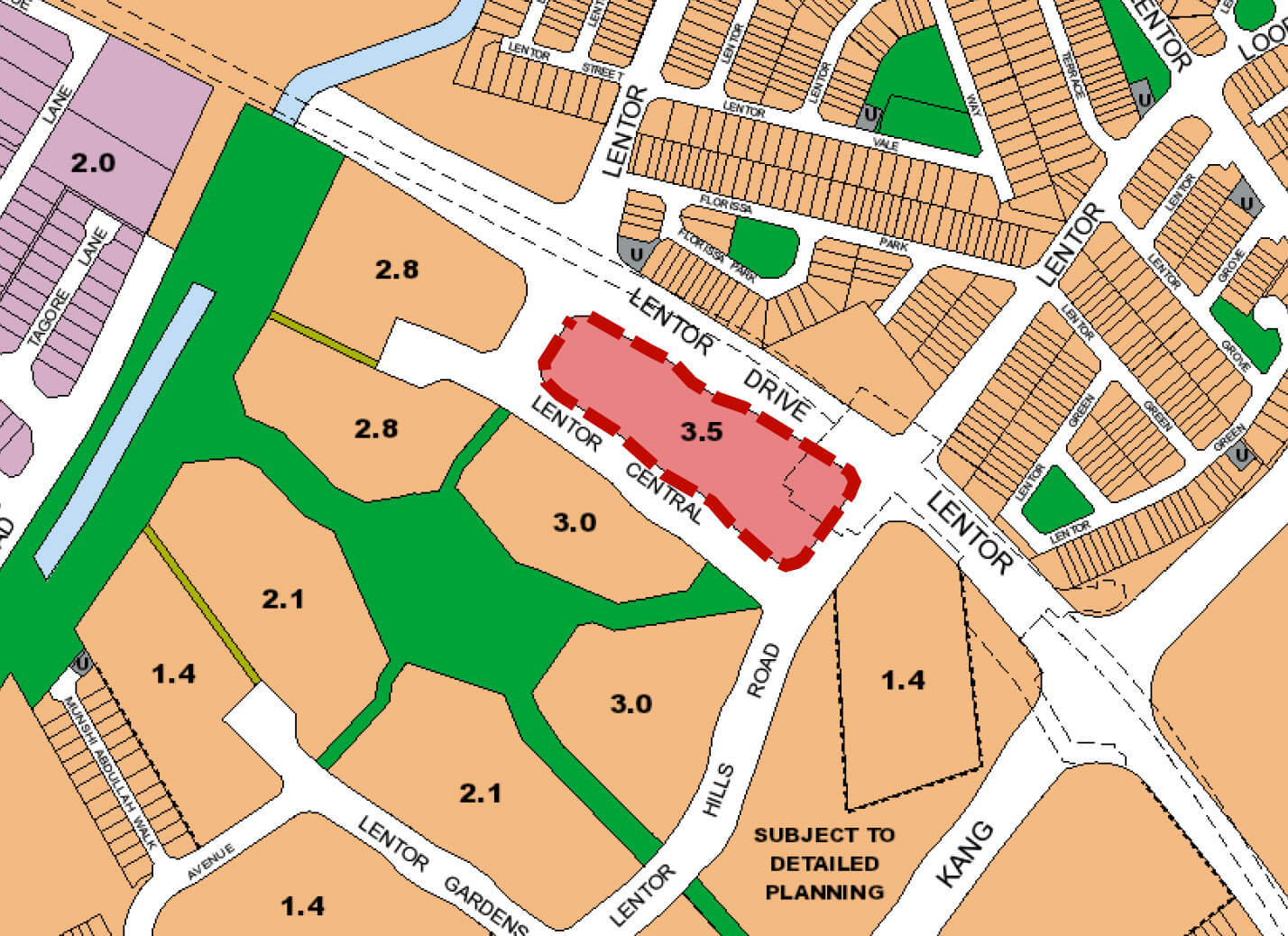 That is to say, most residents will be coming to Lentor Modern – likely for groceries.

Therefore, there will be a good chance that residents at Lentor Modern may experience crowded or heavy traffic situations, especially on weekends.

And although Lentor Modern is selling itself as an integrated development, it doesn’t really have a shopping mall.

It only has 96,000 square feet of commercial space and a supermarket, and it’s all on one single level.

So is Lentor Modern a good buy?

It really depends on your goals.

Firstly, you can’t really go wrong with buying something that is directly connected to an MRT station.

There will also be more developments coming up in the area and it’s been often proven that prices get higher for the latter projects.

But at more than $2,000 psf, this will likely be the future benchmark for new launch projects that are close to an MRT station.

The fact is, we’ve entered a new property cycle with an entirely new price point.

Hence, if you like Lentor Modern and don’t really have other options (that’s if you have researched enough), then it’s really worth considering.