Being one of the biggest project launches in 2018, JadeScape was probably the most talked about condo project in recent months prior to its launch – mainly due to its size, location and also the innovative perks being offered to prospects.

In addition, this will also be the developer’s biggest private residential project on its portfolio to-date and possibly a landmark in the history of the organization. At NewLaunch101.com, we don’t feature or write about every recent new launch in Singapore because we believe some are just not worth mentioning or there’s very little to talk about.

But for JadeScape condo, it certainly deserves the market’s full attention – especially ours. Read on!

Before we going to the details of Jadescape, here is a quick overview of the project information.

The most significant one was Natura Loft (a HDB-DBSS project completed back in 2008), which was being awarded the BCA Green Mark (Gold Plus) in 2010.

Since then, Qingjian Realty has been actively involved in various government land sale (GLS) tenders and has been widely known for its remarkable works, especially in the executive condominium (EC) segment – which makes up the most numbers in the company’s portfolio.

Some of Qingjian Realty’s projects in the EC segment include RiverParc Residence, Waterbay, Ecopolitan, Bellewaters, Bellewoods, and The Visionaire; private residential projects such as Nin Residence, Riversound Residence, and Le Quest.

If you have read the papers and been paying attention to Qingjian Realty’s evolution in the EC market over the last couple of years, it’s quite obvious that a lot of tech innovation, such as the ‘smart home’ concept in JadeScape has already been implemented in a number of their other residential projects.

It has been proved to be very popular among property buyers of the modern era. But the fact is that most condo projects by other developers have also adopted some level of smart home innovation. Thus, to us who are in the real estate industry all year round, it certainly doesn’t tingle our interest.

JadeScape is located along Marymount Road and adjacent to Shunfu Road (condo entry) – on the former site of ex-HUDC Shunfu Ville. It’s close proximity to Marymount MRT station is perhaps the greatest draw for prospects who are looking at condo projects within the vicinity.

The location of JadeScape couldn’t get any better as it sits between the Upper Thomson and Bishan precincts. Along the Upper Thomson stretch, you will find various F&B options – from your favorite local food to a cup of aromatic Australian coffee.

On the other hand at Bishan central, that’s where the Junction 8 shopping mall is. Over there you can get your daily groceries, entertainment, and retail therapy done. Not only that, the condominium is just 1 MRT stop away to Bishan MRT interchange station, which covers the main routes to the northern and southern parts of Singapore.

One of the painful things which we can think of is for drivers. Getting to the city or rather the Central Business District (CBD) can be a pain as the closest expressway down is the Central Expressway (CTE).

If you know what I mean, traffic can get really bad during peak hours and the jam usually tails back all the way from the Ang Mo Kio entrances.

However, that will soon change with the new North-South Expressway or NSC (Singapore’s 11th expressway), which gives residents at JadeScape an alternative route to the core central region of Singapore.

The NSC will be due for completion by 2023, which is right about the same time when homeowners move into JadeScape. 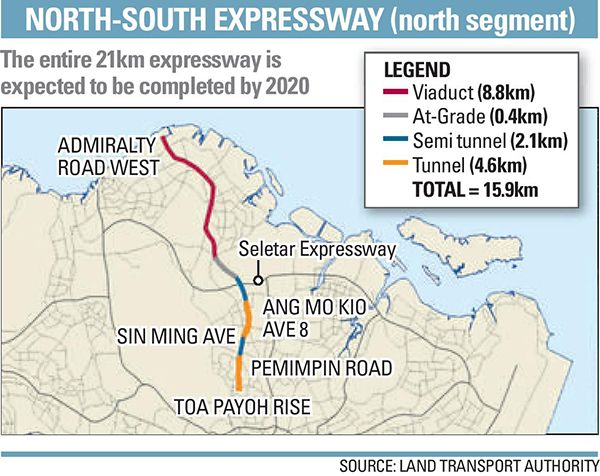 For parents of school-going kids, there are plenty of top educational institutions available around JadeScape condo. This includes the likes of Catholic High School, Ai Tong School, and Marymount Convent.

However, it seems like only Catholic High School is within the 1 km radius while the latter two schools are just off (but still within the 2km radius).

Being a massive development sitting on a massive plot of close to 400,000 square feet, you can be assured that there will an abundance of facilities within JadeScape condo.

According to the developer, there’s a total of 96 active & leisure facilities which will be perfectly constructed between residential blocks.

For instance, there’s not just one but two 50-meters swimming pools, tennis courts, and a golf simulator for the residents to enjoy. Unlike conventional condo developments, Qingjian Realty will also bundle in smart home features within the apartment units and also have WiFi being set up in the common areas.

Some of the smart home features mentioned by the developer include energy-saving aircon units, personalized QR access code for guests.

In addition, there is a mobile app that will allow residents not only to book condo facilities but also control the main door access, scheduling maintenance and repair works whenever required.

Residents will also be able to communicate with the condo management more effectively via the app – such as highlighting incidents and any repairs needed within the compound.

On the other end, the management personnel can also update residents on the progress of such works and also help facilitate the payment of maintenance fees.

The condo will comprise a total of 1,206 units and 6 commercial shops – spreading across 7 residential blocks on a massive land area of 398,114 square feet. 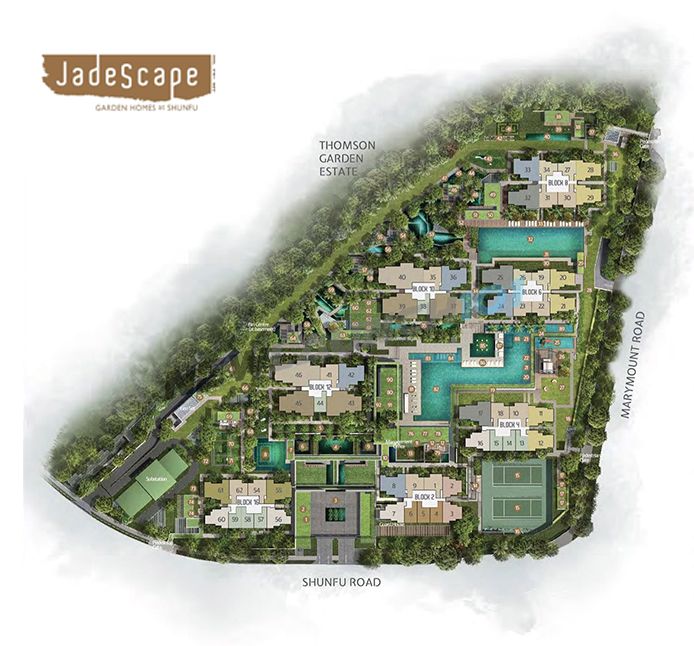 Out of the 7 blocks, 5 of those will be 23-storey tall, and the rest will be 21-storey and 22-storey. The JadeScape floor plan and unit types are as follows: 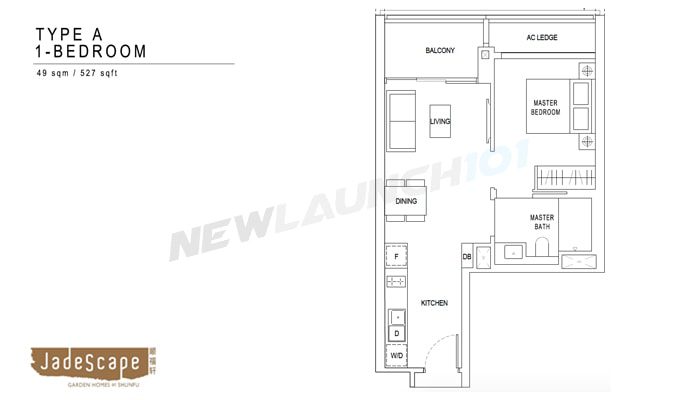 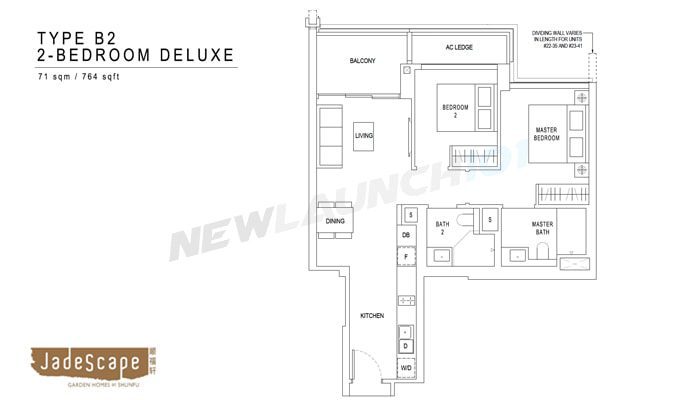 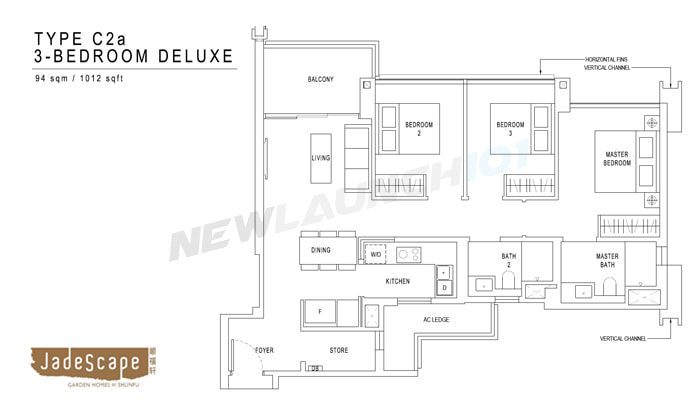 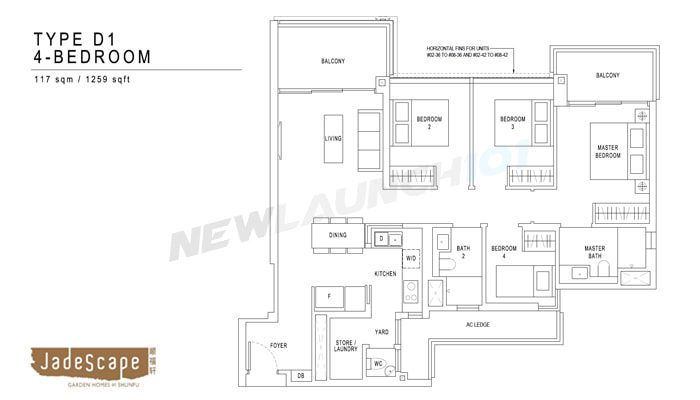 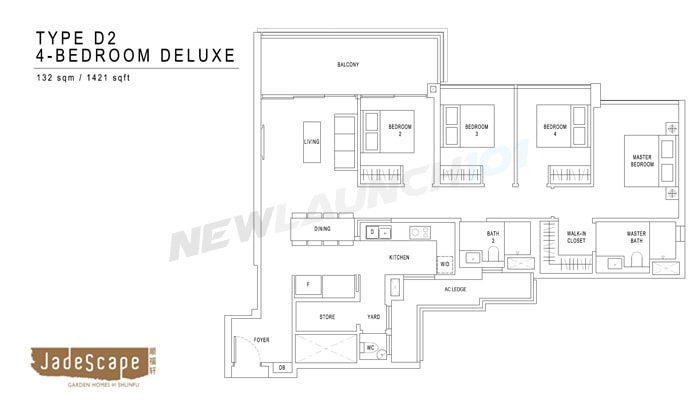 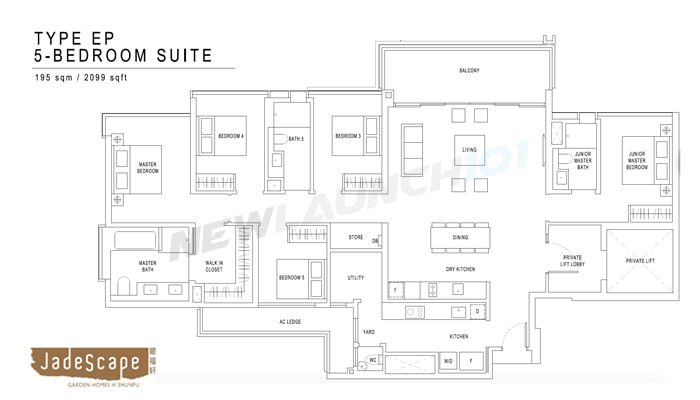 One of the unique unit types at JadeScape is the “gold standard” units. They are basically 1-bedroom (527 sq feet) apartment units that will have fittings designed for the elderly being installed – such as anti-slip flooring, support bars fitted in the bathrooms and wall cabinets that come with a pull-down hydraulic rack.

The height of the sinks and cabinets will also be specially designed to be reached by those residents who are in wheelchairs.

The project was officially launched earlier on 22 September 2018 and more than 300 units were sold during that weekend.

The following is the latest JadeScape price guide (updated on 5 December 2019). It may be subjected to changes and further discounts if any. So do drop us a note and check with us for the latest price guide for each unit type.

The JadeScape showflat is located just next to Sky Vue condo (along Bishan Street 15) instead of on the actual site of the project.

In case you wish to have a sneak preview, here are some of the pictures of the showflat (photo credit: SRI). 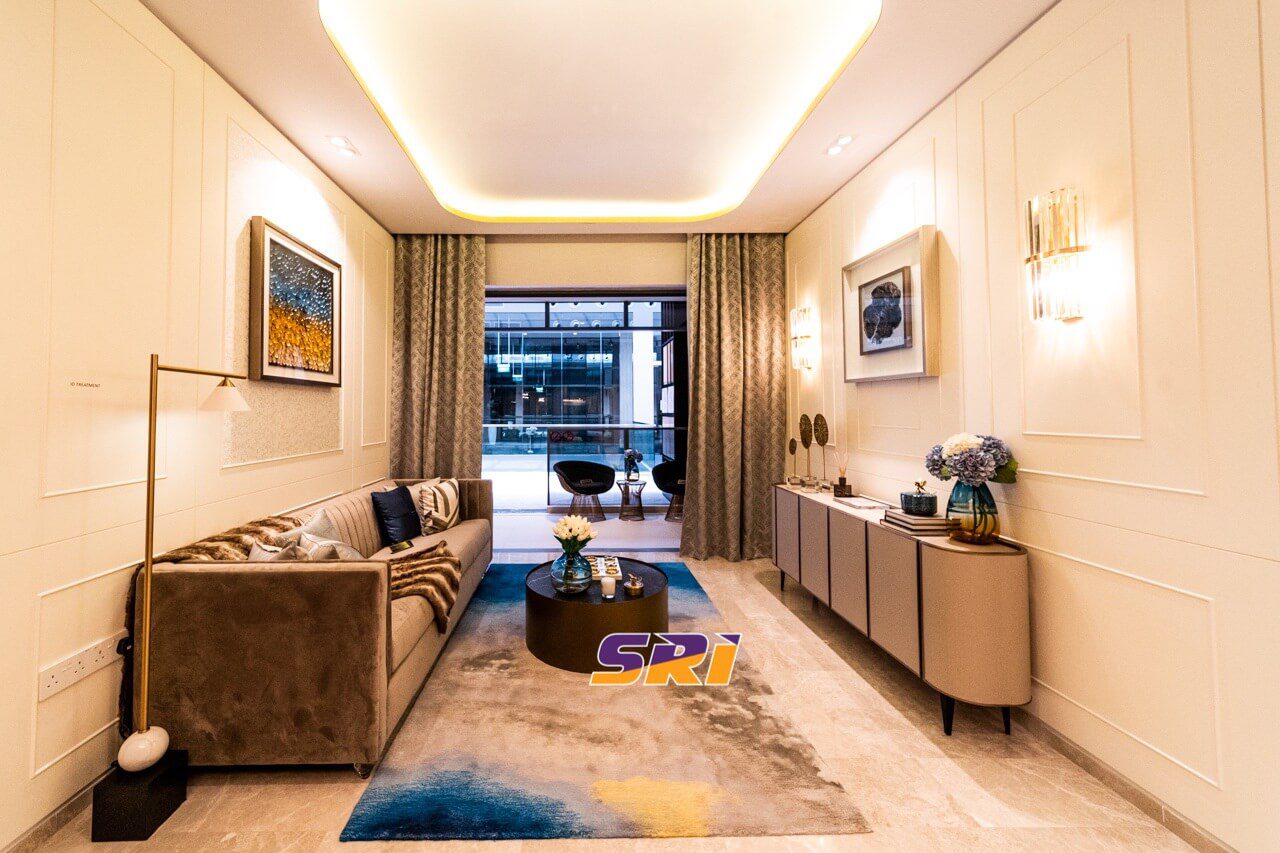 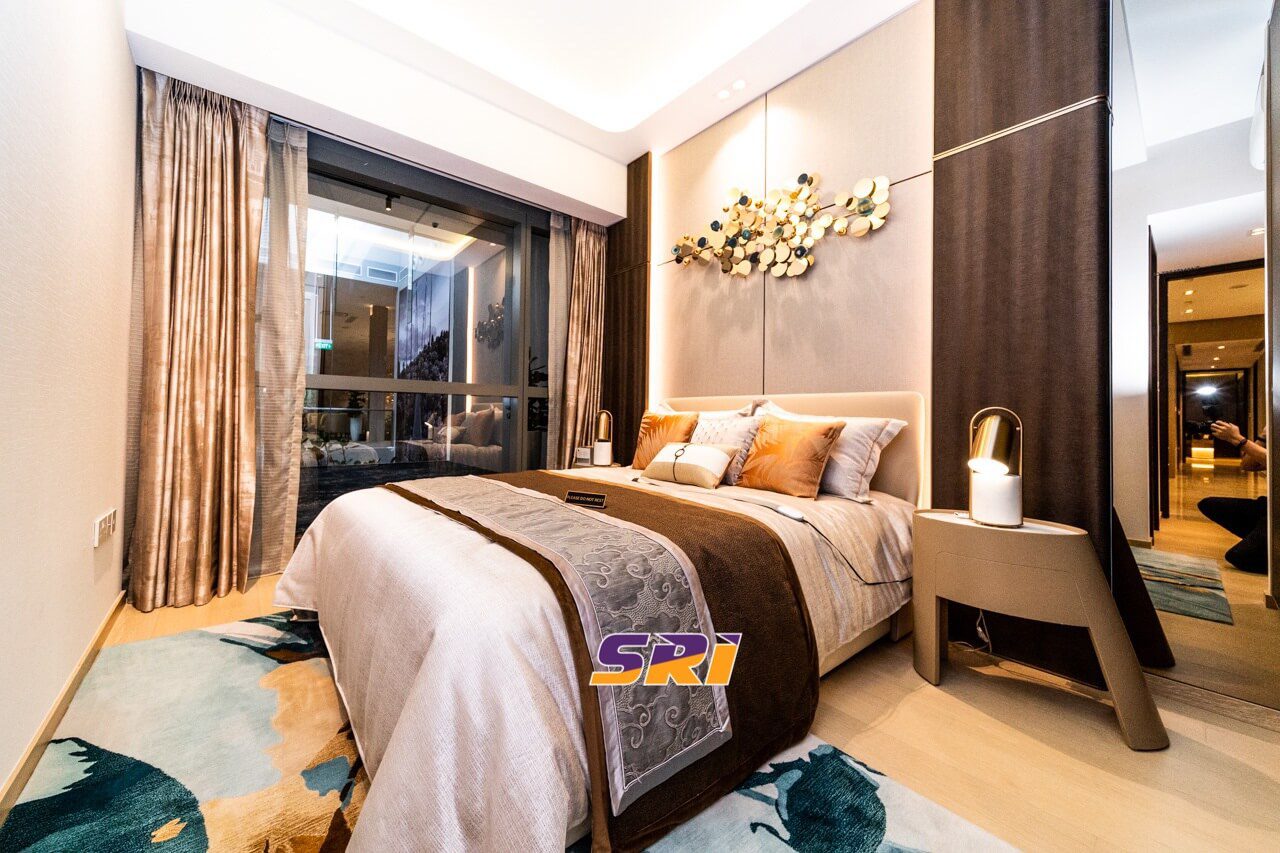 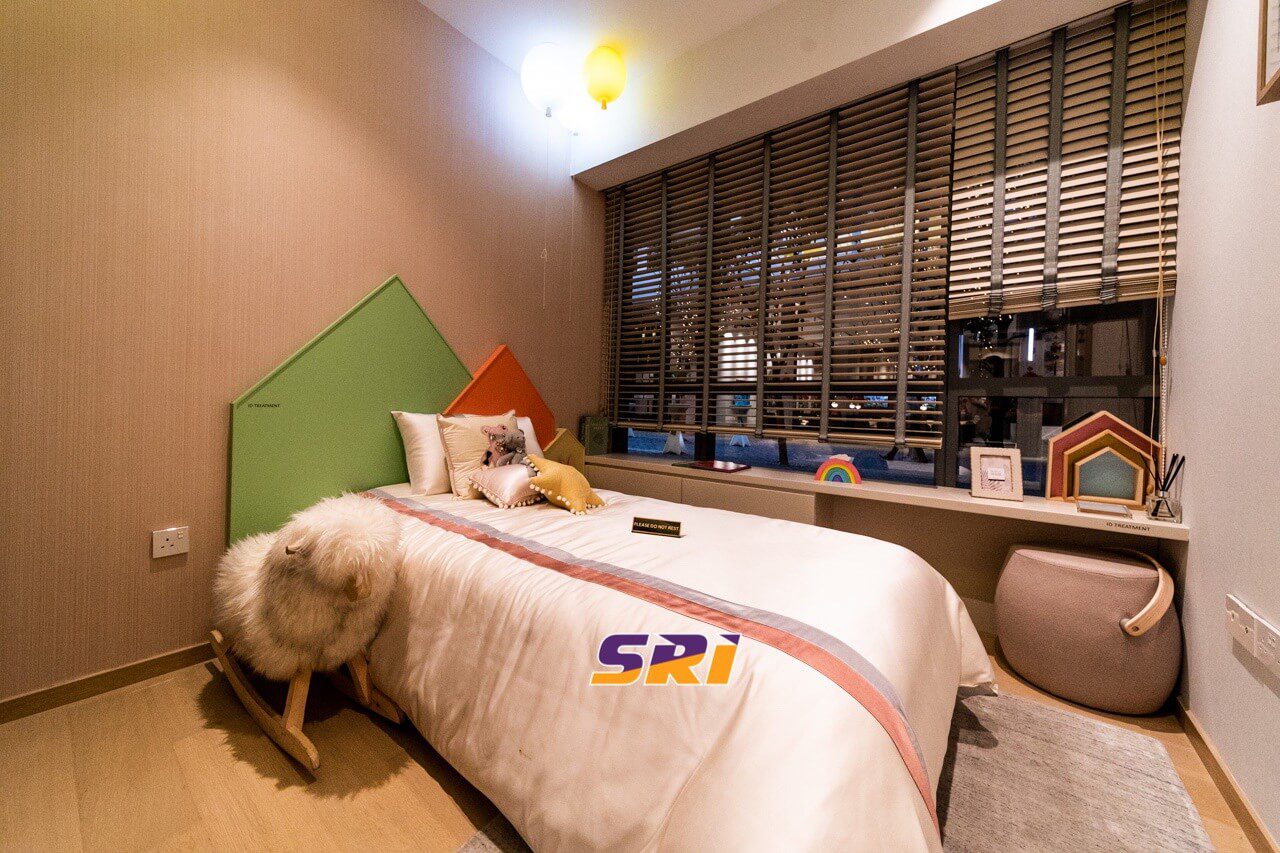 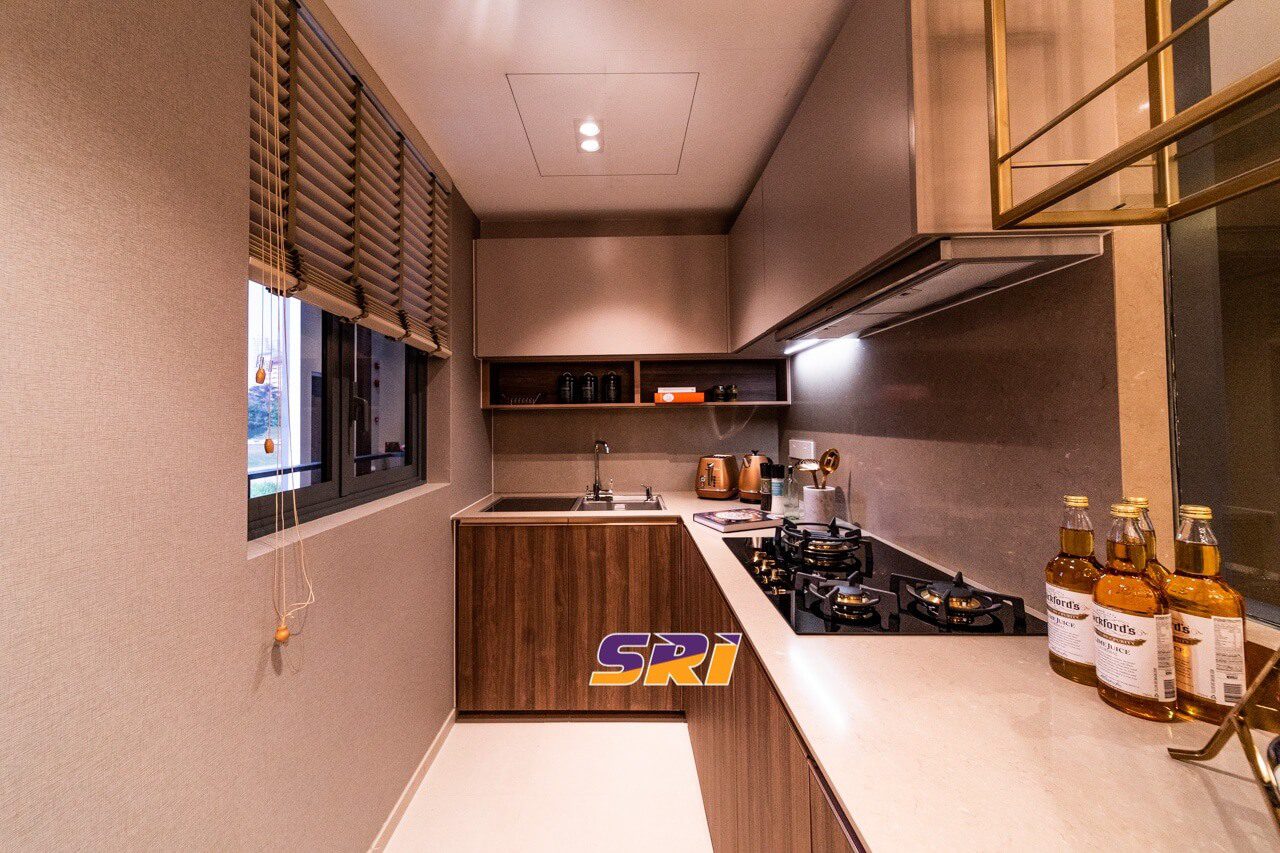 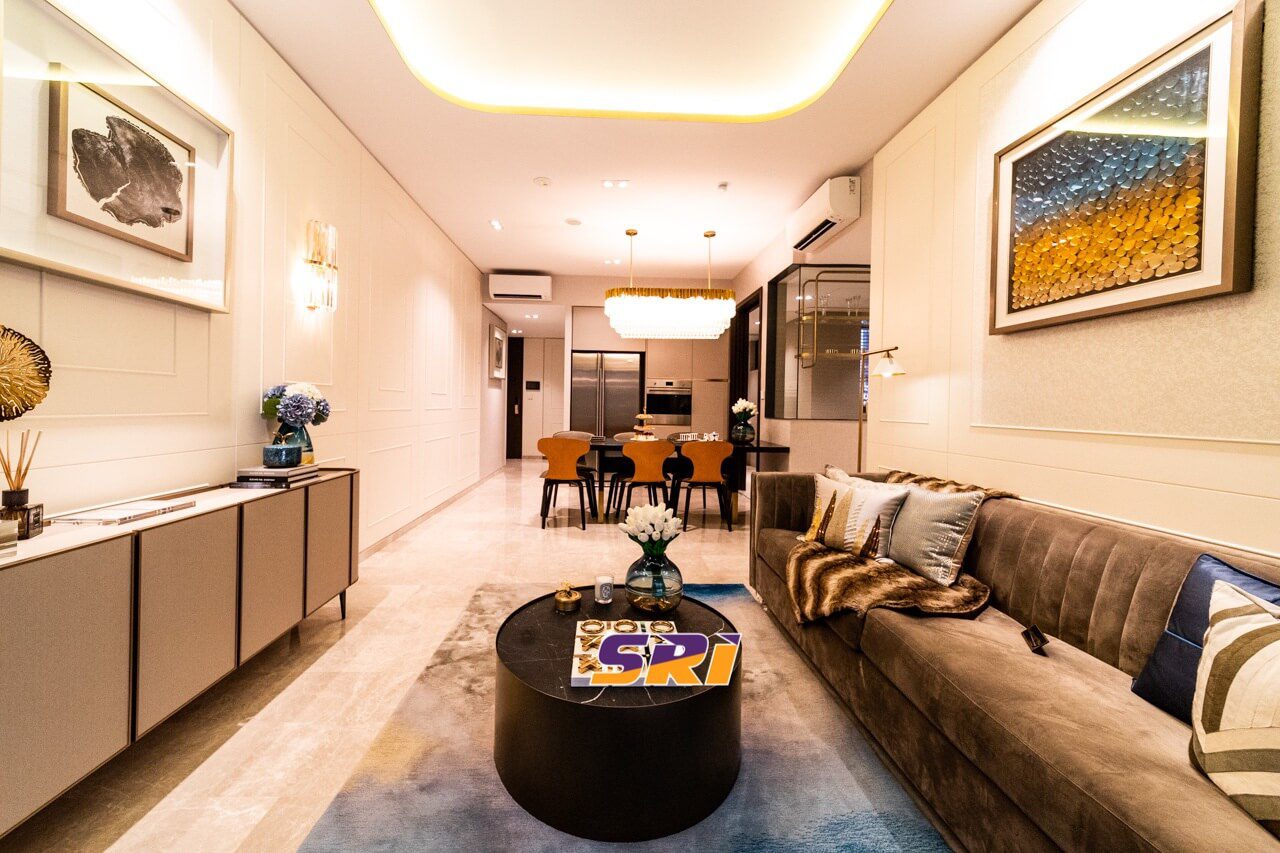 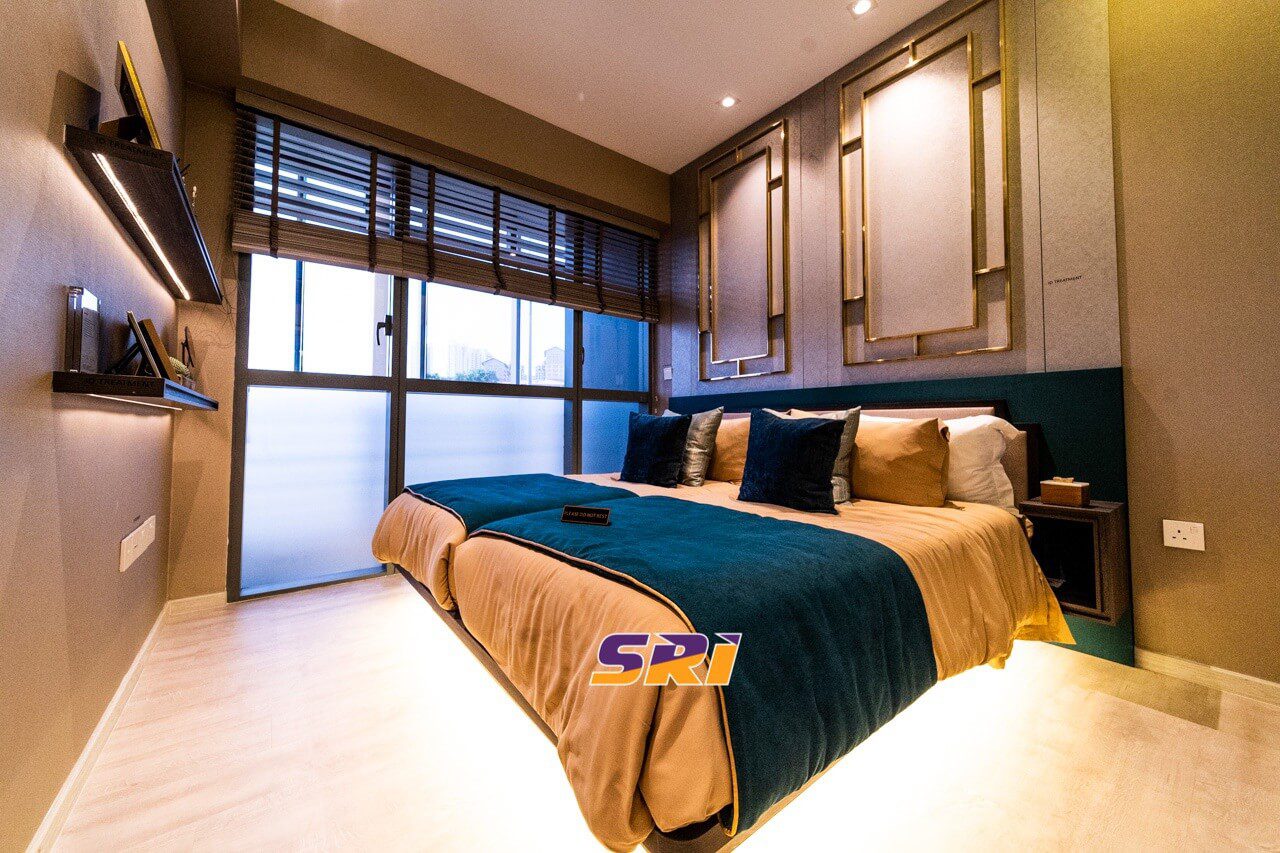 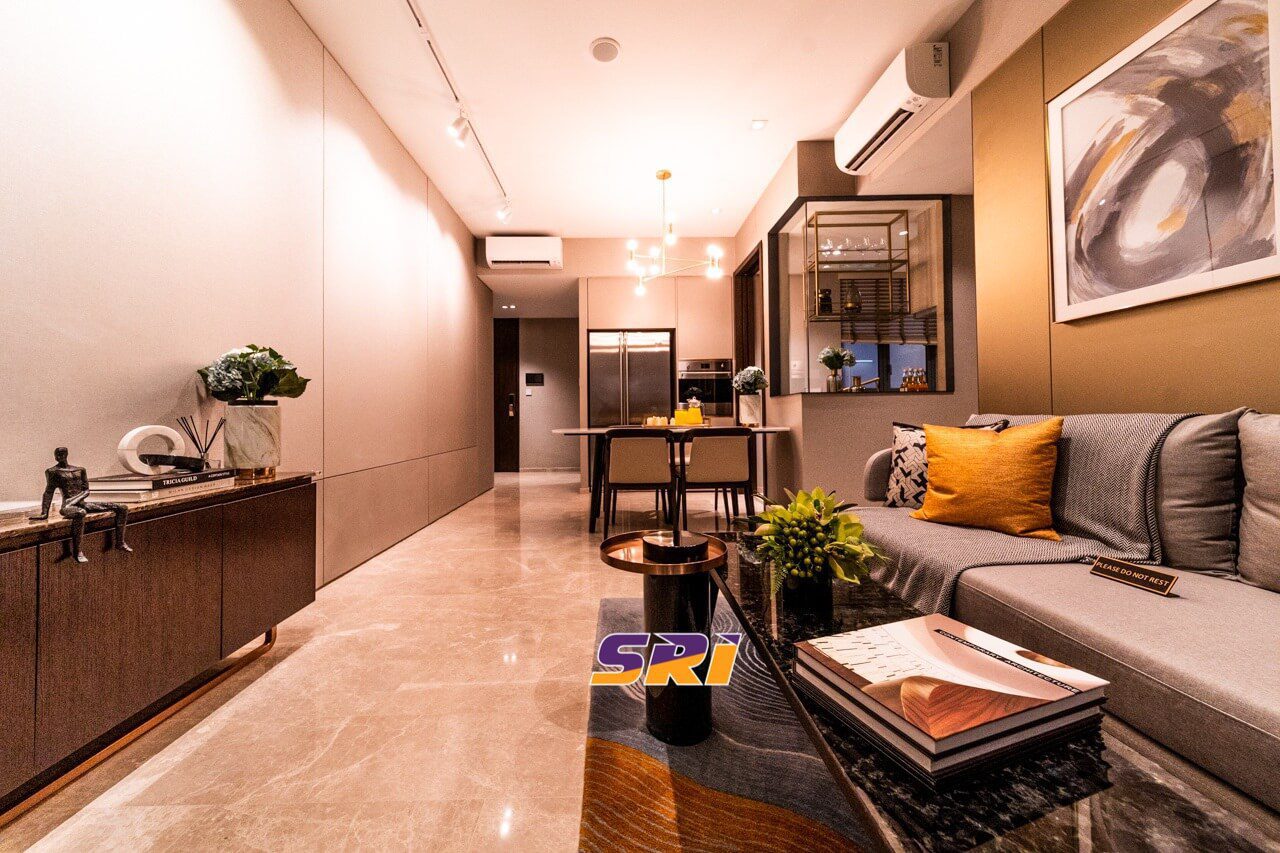 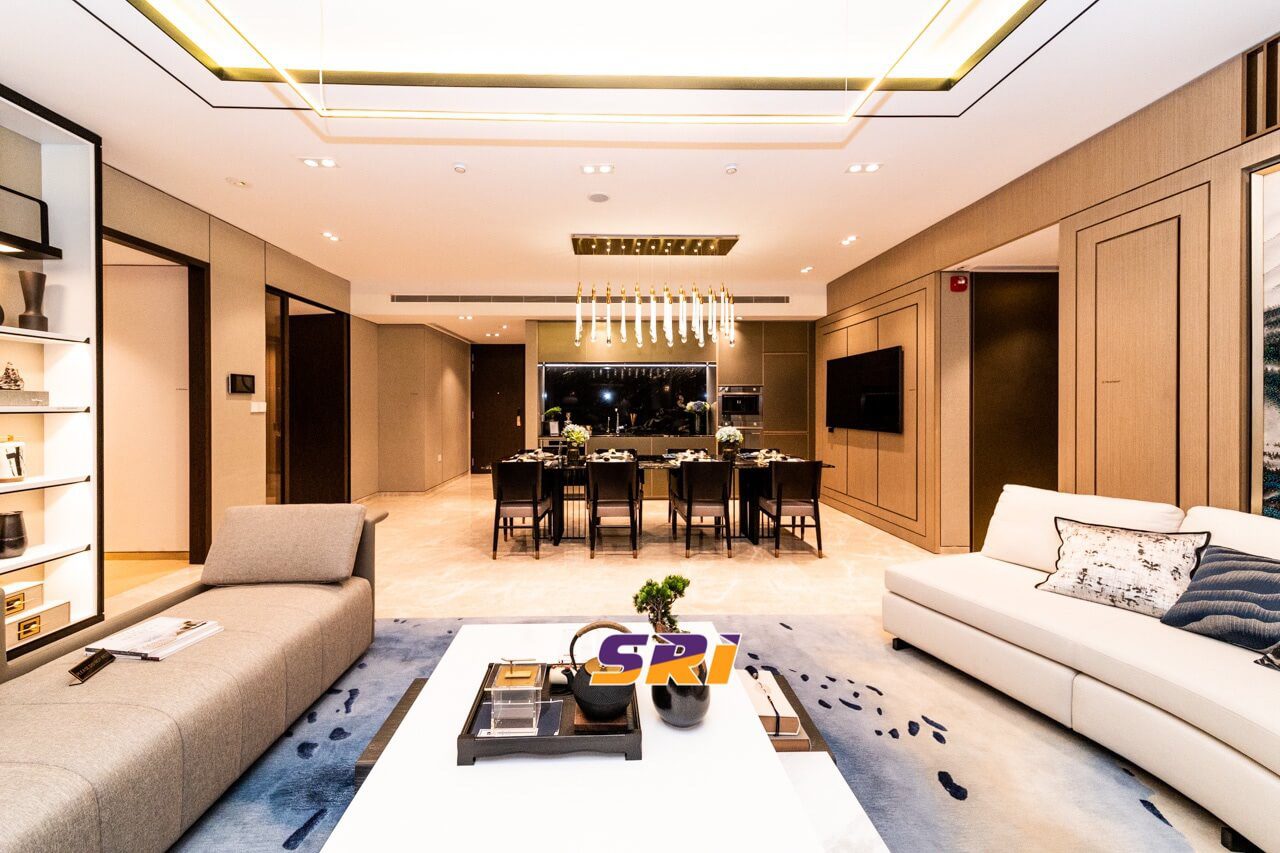 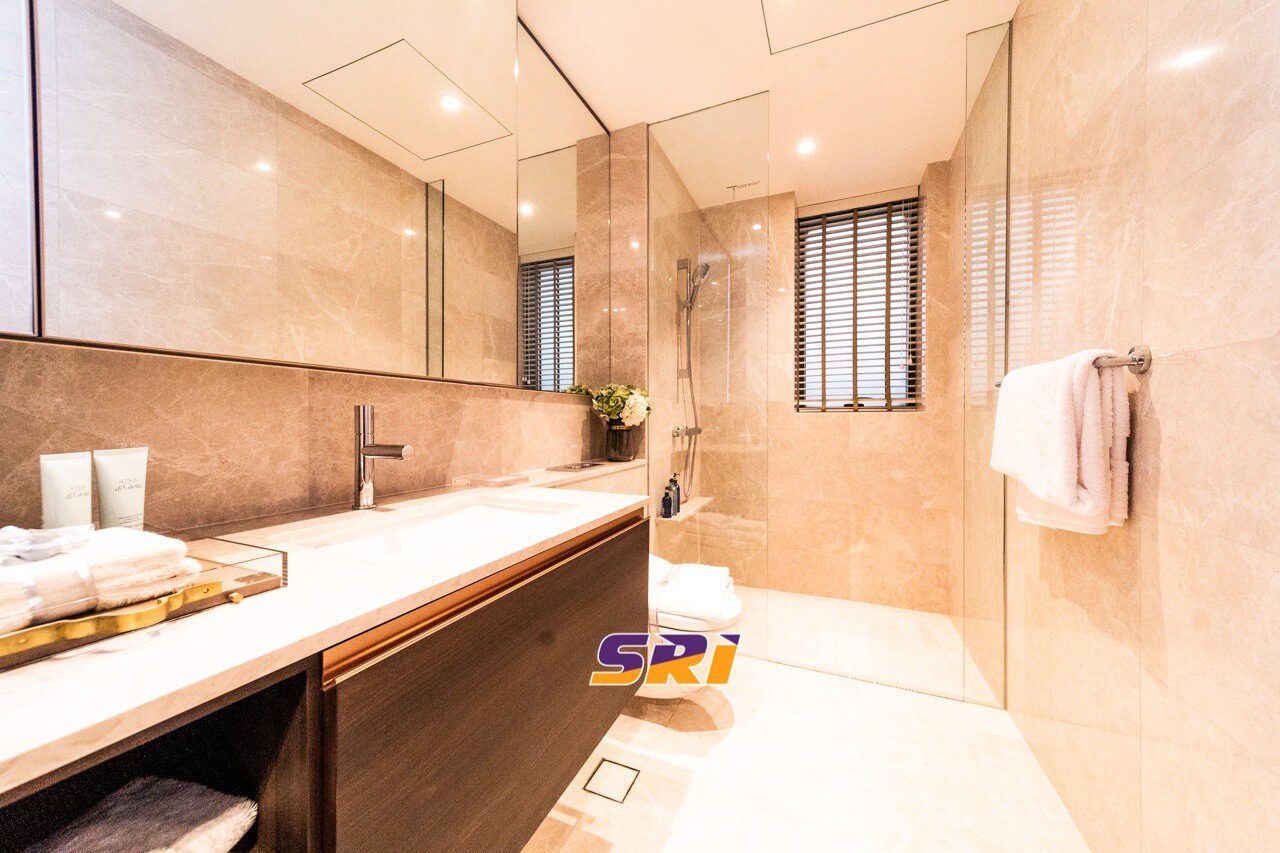 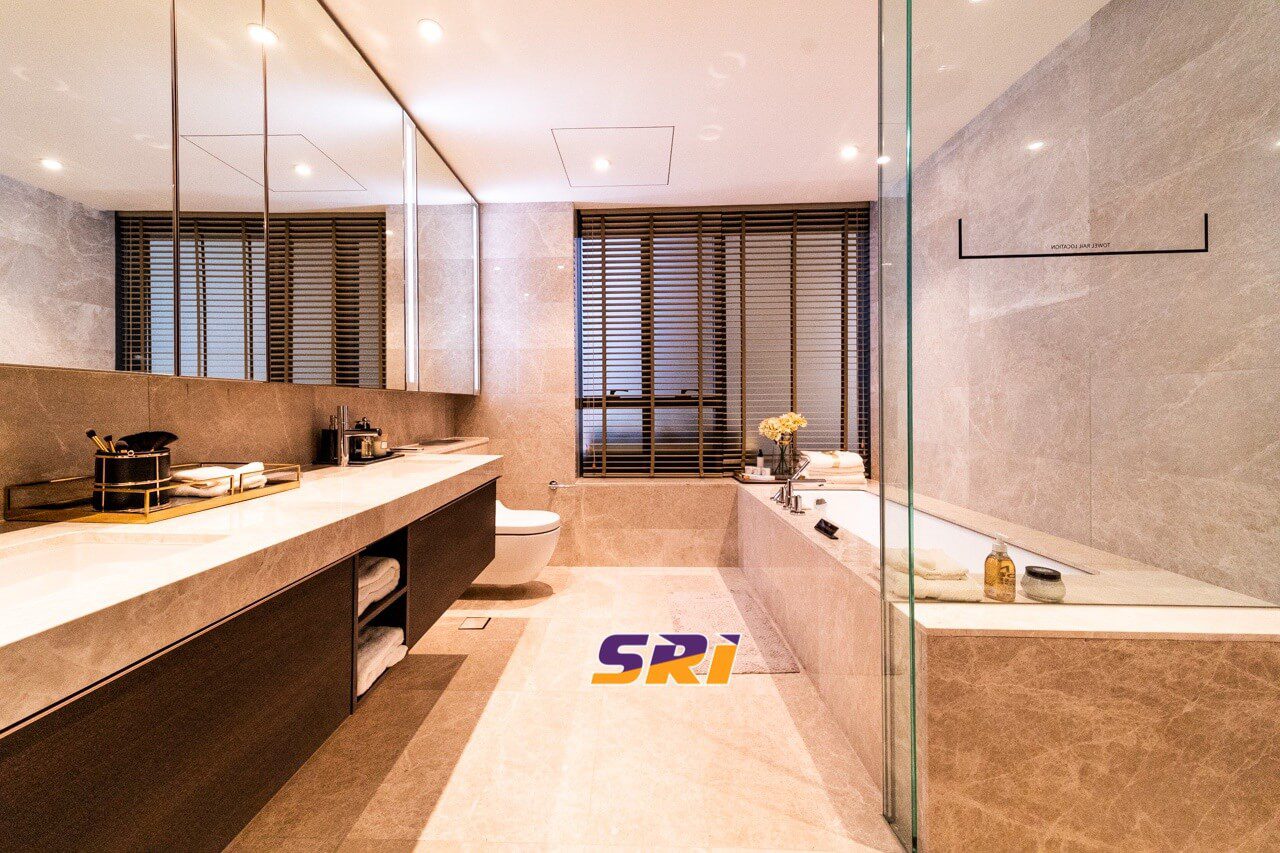 As the opening hours haven’t been announced, do reach out to us at (+65) 6631-8384 or enquire using the form below in order to save you some precious time.

In addition, we may be able to offer you some updates on the discounts and insights into JadeScape as well.

Over the years, Qingjian Realty has received tons of criticism over its projects being poorly constructed and the usage of cheap-looking materials. More often or not, the firm is being stereotyped as a typical money-minded property developer who chooses profits over quality.

One of the biggest criticisms the group received was for RiverParc Residence (an EC in Punggol) a few years back. 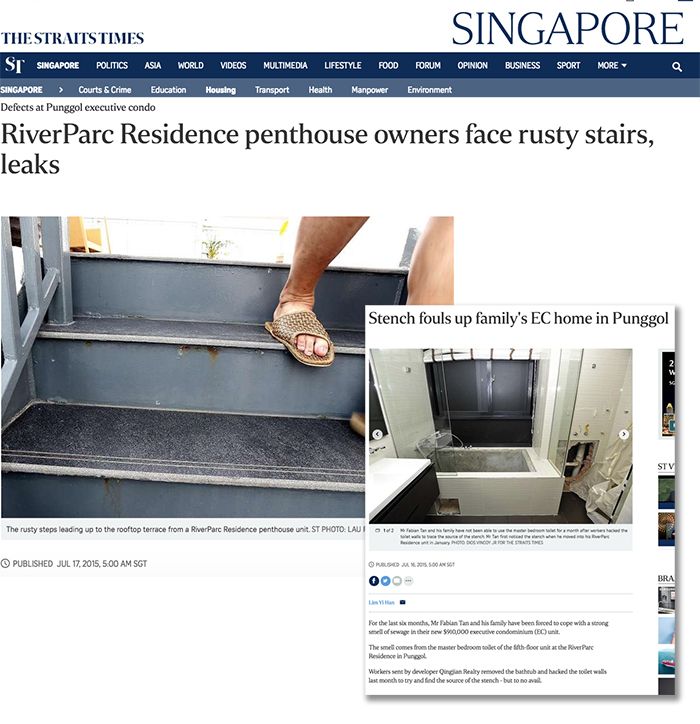 Unlike many other strong and long-standing developers such as City Developments Ltd, UOL, Frasers Property, etc, we believe Qingjian Realty is still some way off in terms of delivering a quality condominium development and it has to start right now with this revamp of Shunfu Ville.

Over the last couple of years in District 20 of Singapore, we’ve seen plenty of new launch projects released in areas such as Upper Thomson and Bishan.

Just for the record, all their typical units have been fully sold and most of them have already received their Temporary Occupation Permit (TOP).

The launch timing of JadeScape couldn’t be any better as it prepares to inject another 1,206 new homes into District 20 and it was noted that around 300 units were sold on the first day of the launch at an average $1,700 psf.

Looking at the Jadescape price point, how does it line up against all these fairly new neighboring condo projects? Let us compare it with transactions that took place within the last 6 months (from 01 March 2018 – 28 September 2018).

You may be thinking that the price looks a little steeper than the rest of the condo. But then again, it’s always been a trend that new launch projects will always be pricing themselves a notch higher – the fact that they are newer and have that additional few more years of land tenure.

And in this case, JadeScape is not only newer, but it is close to an MRT station (always has been the top requirement for most homebuyers in Singapore).

In 2018, we’ve witnessed a couple of mega launches in the city fringe which are also located near an MRT station. So how does JadeScape compare to those projects instead?

The pricing doesn’t seem very steep now, does it?

For buyers who are looking solely at the primary market a.k.a new launches, this will be the benchmark for all the upcoming new residential projects in the city fringe which are located near an MRT station.

Reason being that these sites were acquired by the developers when the property market was on the verge of an uptrend and some even overpaid slightly in order to fill up their depleting land banks.

Thus any further reduction in prices will result in a loss, and let’s face it, no companies or any businesses like to make losses.

But one good thing is that the recent property cooling measures (which took effect on 06 July 2018) will help control property prices on some level.

Thus, you can be assured that prices seen today at JadeScape will maintain at the current mark for the time being and you won’t be forced to make a buying decision right away.

Overall, being the biggest private residential project in their portfolio to-date, JadeScape does present itself as an exciting new launch condo in 2018, and even after two years in 2020.

We dare to say it’s even better than some of the earlier completed projects in the same district such as Thomson Three and Thomson Impressions.