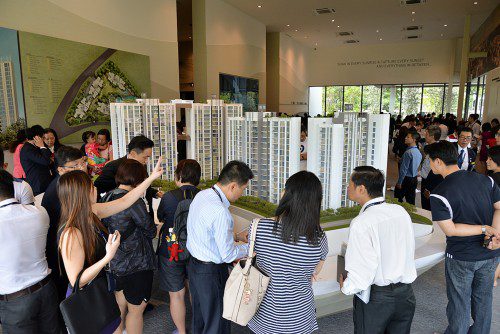 It was no surprise that no new launch projects were introduced during June 2015 due to school holidays, and also the 28th Southeast Asia Games which Singapore hosted. Despite the lack of new launches in the market (which resulted in new private home sales falling by 42% in June from May), it was noted that there were still buying activities and sales concluded in projects which were previously launched.

Video report from Channel NewsAsia on weak new private home sales in June 2015
And it wasn’t just for the earlier mega new launch developments in 2015, such as North Park Residences and Botanique at Bartley that were topping the chart for being the best selling developments. Apparently, buyers were returning to “older” projects, some which were launched 1 to 2 years ago.

It was mentioned that in the current property market, projects no longer get sell out within 1 or 2 months from the day they were launched. Over the last 2 months, property buyers were going for units in developments which were previously launched. Such developments are usually the bigger ones with plenty of remaining units, some even with units situated on good stacks as they were released in the later phases.

Another reason for this pick-up in buying momentum is that property buyers evaluated that it is unlikely that property prices will continue to fall, due to the in forthcoming general elections, which some of the existing property cooling measures could be revised by end of 2015 or early 2016.

However, in order to lure buyers back to these earlier projects, developers had to engage in various strategies, such as offering of additional incentives, special discounts or referral programmes etc.

One the of new launch condo which experienced the boost in sales is The Panorama (located in Ang Mo Kio, next to St Nicholas Girls’ School). Just in June 2015 alone, 23 units were sold, adding up to the earlier 44 units sold in May. It was mentioned that this sales momentum started since August 2014 and has been consistently topping the sales chart as one of the 5 best selling projects each month.

This miraculous reversal in sales performance was mainly due to its reduction in purchase prices from the first month of launch in mid-January 2014, where the median price transacted was a high $1,363 psf (total only 56 units sold). The latest median price for units sold in June 2015 was S$1,231 psf. That’s approximately 9.6% price reduction as compared to the price first launched.

It was also noted that the other attractions of The Panorama is its location, which is situated approximately just 300 metres to the upcoming Mayflower MRT Station (part of the Thomson-East Coast MRT Line), and also its close proximity to one of the top schools in Singapore – CHIJ St Nicholas Girls’ School.