The private residential site at West Coast Vale – placed under the reserve list of 2H 2017 Government Land Sales (GLS) programme, will be put up for sale via public tender after receiving a minimum bid of no less than $379.988 million (or $643.53 psf ppr), said the Urban Redevelopment Authority (URA) of Singapore.

URA mentioned that the bid received from the undisclosed property developer has been deemed acceptable by the government and the West Coast Vale GLS site will be launched for sale in approximately 2 weeks’ time.

The West Coast Vale GLS site spans across a land area of around 1.9-ha and has an estimated maximum GFA (gross floor area) of 590,475 square feet, located among various condo developments such as Botannia, Carabelle, The Infiniti and also the latest Parc Riviera condo (which is currently under construction).

Earlier this year in February, another private residential site at West Coast Vale was sold to China Construction (South Pacific) Development Co. for $291.99 million (or $592 psf ppr) – which was already 7% higher than the price which EL Development paid for Parc Riviera’s site back in August 2015.

Market watchers have noted that based on the minimum bid received for the subject West Coast Vale site, it won’t be surprising that the top bid will be in the range of $700-$800 psf ppr. 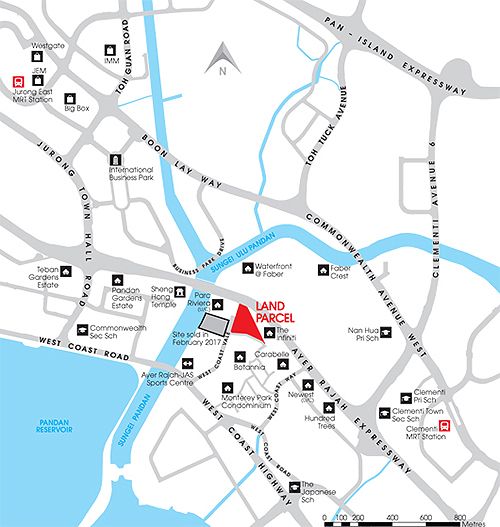 A noticeable ‘competition’ in the area for the site at West Coast Vale would the the en bloc of Park West condo – located near Clementi MRT Station, which has been recently launched for sale.

Park West condo is currently sitting on a site with a bigger land area of around 633,644 square feet and a 2.1 gross plot ratio.

The owners at Park West are expecting a sale price of $818 million and together with the projected differential premium and additional cost for lease top-up, the psf ppr price for Park West will work out to be around $788.