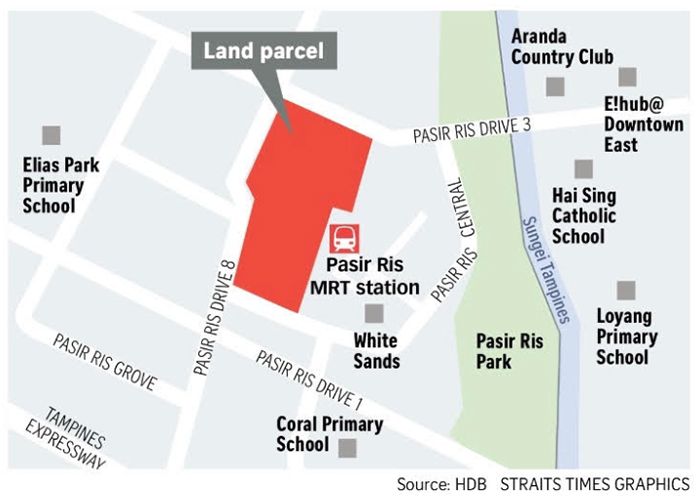 A land parcel located at Pasir Ris Central, just next to the Pasir Ris MRT Station has been launched for sale by Housing & Development Board (HDB) of Singapore on Monday 27 August 2018.

Being zoned as a “white site”, the 99-year leasehold plot has a massive land area of 3.8 hectares and has been earmarked for a mixed residential and commercial development. In the addition, the future new launch project will have to be integrated together with a bus interchange, a town plaza and also a polyclinic.

A white site is land parcel which allows a wide range of uses, although there will often be stipulations and guidelines set by the Government – in order to meet its planning intentions.

It was noted that the Pasir Ris Central site is on the Confirmed list, under the 2H 2018 Government Land Sales (GLS) programme and will be offered via public tender through the “dual-envelope” system.

Under the dual-envelope system, bidders will have to submit both their concept proposals and bid price in 2 separate envelopes for the Pasir Ris Central GLS site. The tender prices will only be considered for those who have been shortlisted for their development concepts.

According to HDB, the site has a total permissible GFA of 95,010 sq metres and a 2.5 gross plot ration. It is expected to yield around 600 private residential units and commercial spaces of approximately 35,900 sq metres.

Analysts believed that the site could draw up to 8 bids in total and the winning bid could come in at a range between S$800 to S$830 psf ppr. Taking into consideration that there aren’t many new launch condominium projects within the area, a strong demand may come from mainly upgraders and also young families.

They’ve added that given the size of the Pasir Ris Central GLS site and its conditions for tender, it could possibly attract developers of bigger scale, joint ventures, and consortiums.