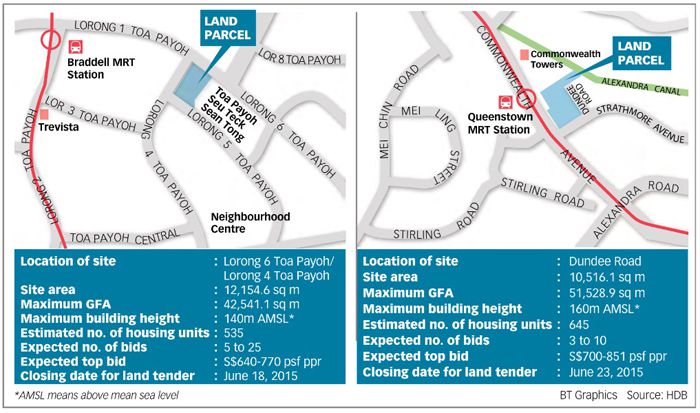 Consultants forecast a high level of demand for the recently released 99-year leasehold residential sites in Toa Payoh due to the limited supply of housing around the area. On the other hand, interest on the residential site along Dundee Road may be hampered by the unsold units near its locale.

These two were launched by the Housing & Development Board (HDB) under the Confirmed List of the First-Half 2015 Government Land Sales (GLS) which collectively yields around 1,180 residential units.

Ong Teck Hui, national research director of JLL, said that it’s likely to attract high number of competitive bids for each plot from property developers due the low availability of land for sale so far in 2015 (only 3). However, developers are still wary due to the volatile situation of the market which brings about pricing difficulties finally resulting into hardships in finding buyers for their units.

There is a wide disparity between consultants as to how many bids the Toa Payoh site would receive, from as few as 5 to as many as 25. However, Nicholas Mak, SLP International’s Executive Director was very positive that the Toa Payoh site would attract 15 bids at the very least, and 25 at best, the top bid being within the S$311-332 million or S$680-725 per square foot per plot ratio (psf ppr) range.

Mr. Mak cited locational features which attracts more buyers as this site is a mere 20-minute drive to the Central Business District (CBD) and merely a few minutes’ walk to Braddell MRT Station. On top of the location of this plot, there are only a few remaining land sites for potential residential development around its vicinity which drastically lessens the competition, giving it a higher competitive price. As a matter of fact, the last sale in Toa Payoh was 7 years ago, in 2008, when NTUC Choice Homes bought a site for S$290.2 million (S$460 psf ppr) from the developer’s 99-year leasehold project, Trevista, which sold 590 units at an average price of S$1,352 psf upon completion in year 2011.

Lee Nai Jia, head of research of DTZ, mentioned that these new apartments would attract young homeowners due to its proximity to nearby schools. On the other hand, he added that the Dundee Road site would attract investors and owner-occupiers given its strategic location between the CBD and one-north development, in addition to nearby education institutes such as Gan Eng Seng Primary School.

However, other consultants reiterated their concerns regarding the unsold inventory around the Dundee Road area. They pointed out that a nearby development by City Developments Limited (CDL) and the Hong Leong Holdings, the Commonwealth Towers, have only sold less than half of their 845 units as of the end of March. Therefore, it would be likely for them to bid aggressively to protect their position in the area. Ong Kah Seng, director of R’ST Research, noted that in addition to Commonwealth Towers, the Alexandra locality at Redhill also has new developments being currently constructed such as The Crest, Echelon, and Alex Residences. All these add up to more competition to potential developers. Hence, consultants forecast 3 to 10 bids for the Dundee Road site, the top bid being estimated at S$700-851 psf ppr.