Under the H2 2016 Government Land Sales (GLS) Programme, the Ministry of National Development (MND) have announced 4 sites to placed for sale under the Confirmed List. This includes 3 sites zoned for private residential at West Coast Vale in Clementi, Perumal Road near Farrer Park and Fernvale Road in Sengkang, and a mixed-used residential & commercial site along Upper Serangoon Road in the upcoming Bidadari estate. 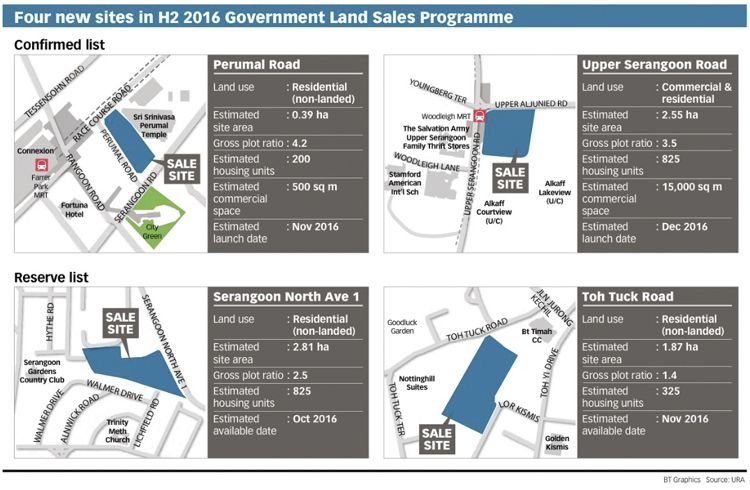 Another 11 sites have been placed under the Reserve List (will only be launched for sale upon triggering bid from property developers or when there’s sufficient interest received from the market).

Among the 4 new sites on the Confirmed List, the future new launch project site along Upper Serangoon Road has been expected to be the more keenly contested and fuel exceptional demand as compared to the rest due to its prime location next to the Woodleigh MRT Station, as well as the catchment of the upcoming Bidadari estate.

According to property analysts, they too expect strong competition between developers for these 4 sites as developers are looking to replenish their land banks due to the reduced supply in land since 2012-2013.

It was noted by National Development Minister, Mr Lawrence Wong that the supply for the 2nd half of 2016 was increased to match the actual committed supply in the 1st half of the year. This is part of the continual effort from the government to strike a balance in the Singapore property market in order to ensure stability in housing prices.