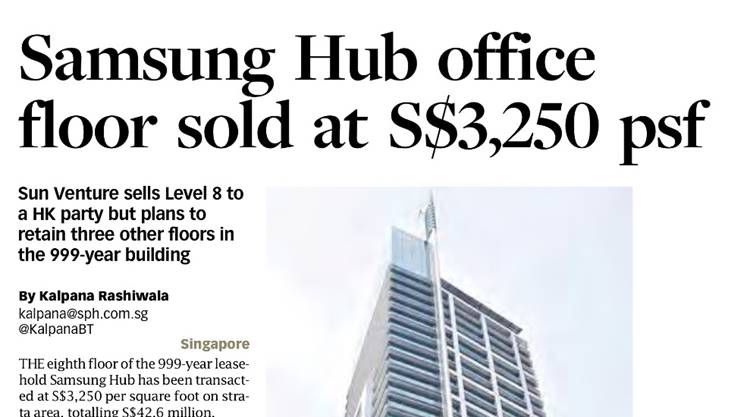 Singapore has always fascinated many international brands, such as tech giants Apple, Google, Microsoft and Intel, also other financial service institutes which include Barclays & Credit Suisse. It’s not difficult to understand why commercial space investment provides one the best returns in the long run. Recently, Sun Venture sold their entire level of strata office units (4 units with total size of 13,110 sqft), which are sitting on the 8th floor of 999-year Samsung Hub building, to a Hong Kong-based investment company at an attractive price of S$3,250 per square foot (psf).

Sammi Lim, an associate director of CBRE said that based on this transacted price, the overall net yield works out to be around 3.2% (at a monthly rental of S$10 psf). The lease will run for the next 3 years till September 2018. Ms Lim also highlighted that the offer of $3,250 psf is consider an attractive offer to Sun Venture, as a high floor space (on Level 21) was recently transacted at $3,280 psf during October 2014. It was also mentioned that this is not the first deal between both parties. Previously the Hong Kong-based investment company has also bought commercial strata units from Sun Venture in other commercial buildings in Singapore.

Within the vicinity, a couple of new commercial launches have been ongoing.  One of them is the 28-storey tall GSH Plaza, also known previously as the Equity Plaza. Strata office units located from Level 3 to 15 are being marketed at a price range of S$2,850 to S$3,500, unit sizes from 480 sqft to 1,700 sqft. It was noted that a lucrative bulk discount of 10% will be given buyers who purchase an entire level. Unlike Samsung Hub, GSH Plaza has a remaining lease period of only 73 years and the owners (a consortium led by GSH Corporation) will not be topping up the lease. The building will undergo a large-scale refurbishment.

Another commercial building around is the 30-storey tall Prudential Tower, which has a lease of around 80 years left. A consortium led by KOP has sold four half-floor units from their acquisition of 19.5 floors in the commercial building last year. The size of the strata units sold were either 5,100 sqft or 5,950 sqft, situated on the 10th, 11th and 19th floor, for a prices between S$2,750 psf to S$2,805 psf.

Back to Samsung Hub, Sun Venture are also the current owners of 9th, 10th and 11th floors of the 30-storey commercial office building located along Church Street. They were previously acquired from Ho Bee in August 2010 for a much lower price of S$2,125 psf. Managing director of Sun Venture, Alvin Teo has mentioned that these units are currently not for sale. The company is intending to hold out for long-term due to the rarity of Freehold or 999-year leasehold office spaces in the Central Business District, or even in Singapore.

Sources have shown that Singapore-based company Sun Venture has been strongly financed by Taiwanese Investors. They are also the owners of Straits Trading Building located in Raffles Place as well. Not only that, they also jointly possess the retail podium at the commercial building called Paya Lebar Square, and Westgate Tower, which comprises of a total of 20 office floors situated next to Jurong East MRT Station.