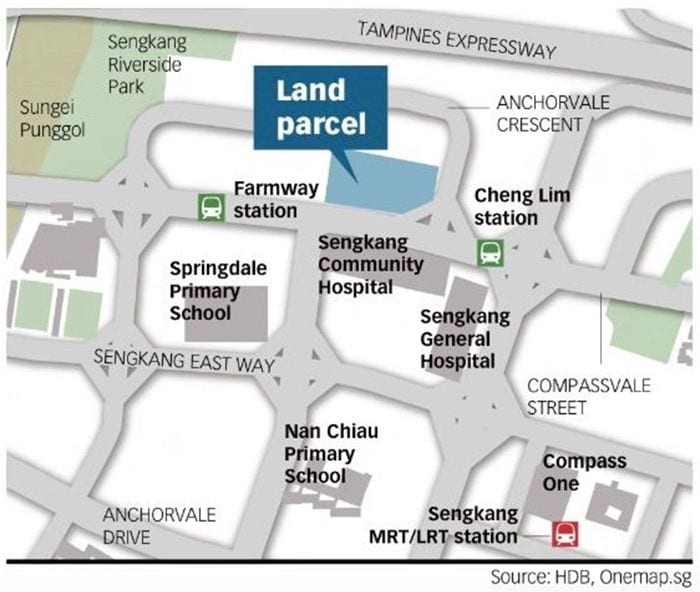 With the private residential market taking a hit from the recent property cooling measures, it does seem like developers have shifted their focus the executive condominium (EC) segment with one unnamed property developer submitting a “triggering” bid for an EC site at Sengkang.

The 184,062.9 square feet Sengkang EC site is currently placed under the Reserve list of the Government Land Sales (or GLS) programme and for it to be triggered for sale, a bid of at least $255 million or $460.80 psf ppr has to be submitted.

The Sengkang EC site is located along Anchorvale Crescent – just right opposite the newly constructed Sengkang General Hospital and Sengkang Community Hospital. It is also situated close to Cheng Lim LRT station and within proximity to Sengkang MRT station and Compass One shopping mall. The future new launch EC at Sengkang is expected to yield around 550 EC units.

ECs are often being deemed as a hybrid between both public and private housing in Singapore and it is mainly catered for buyers who are in the “sandwiched class” – those who do not qualify to purchase a brand new HDB flat due to high monthly income, and yet find it financially stretching to purchase private residential property.

Analysts are expecting a strong demand for this site despite the recent property cooling measures which were unveiled on 05 July 2018 as potential buyers will not be required to pay the additional buyer’s stamp duty since they aren’t allowed to own any other residential properties prior to the purchase of an EC unit.

In addition, there has been a strong demand and yet a lack of supply for EC units within the past year and for some developers, EC projects may be a much safer bet as compared to private residential projects. It was also reported earlier that developers even resorted trim prices down by up to 10% in due to the cooling measures.

They have also added that the Sengkang EC site could draw up to 18 bids – with the highest offer possibly coming in at around $465 to $551 psf ppr.

The last EC tender this year happened back in February when the Sumang Walk EC site was acquired by City Developments Ltd (CDL) for a whopping bids $583 psf ppr – outbidding 16 other bids which were received.

It was noted that 2 more EC sites will be released for sale on the market this in September and October this year – located near Canberra MRT station and along Tampines Avenue 10 respectively. Both of these EC sites are placed under the Confirmed list and will be definitely be launched for sale according to the planned schedule.