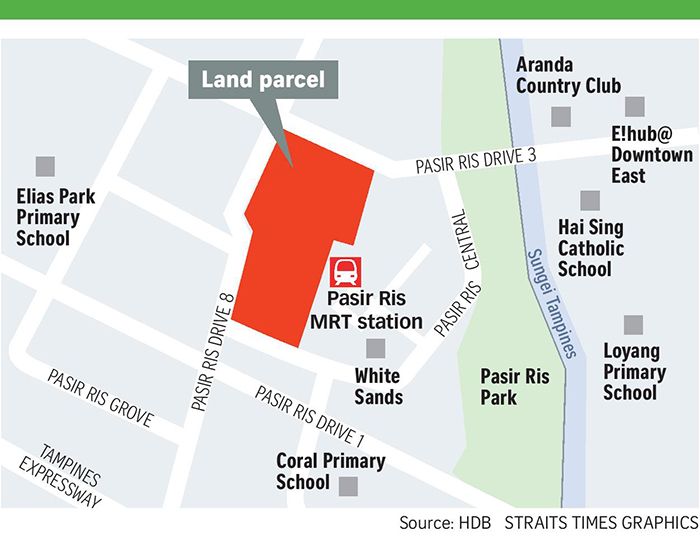 A muted response was received for the Pasir Ris Central white site as only 3 bids were submitted.

Among the involved bidders include Far East Organisation, a joint venture between Singapore Press Holdings (SPH) and Kajima Development (who are also developers of Woodleigh Residences, a mega mixed-development next to Woodleigh MRT station), and a subsidiary firm owned by real estate developers Allgreen Properties (developer for the new Fourth Avenue Residences) together with Kerry Properties.

The Pasir Ris Central white site spans across a land area of 3.8-ha and is located next to Pasir Ris MRT station. As part of the stipulated conditions for redevelopment, the future new launch at Pasir Ris will be required to integrate a town plaza together within a polyclinic and a bus interchange.

Analysts mentioned that the 3 bids received were way below the expectations despite the fact that it is located just next to Pasir Ris MRT station and holds the potential to develop a promising retail mall. In addition, the demand for private homes there will likely receive a strong demand.

Despite the relatively high price point and technical conditions for the land parcel, analysts have added that the subdued response is a clear reflection of the dejected market outlook.

An obvious comparison was made with the Sengkang Central GLS site which drew 7 bids before the implementation of the new property curbs earlier this year.

Some market watchers believed that the weak response for the Pasir Ris Central white site was likely because most experienced property developers in Singapore have already made up the numbers in their land banks – which will provide enough revenue for the next 2 to 3 years.

On top of that, a longer construction period will likely be required due to the complexity and massive scale of the site. Thus, the winning developer may face higher development risk as it may not be able to sell all of it residential units within the stipulated 5-year timeframe set by the government (which will result in ABSD charge upon failure).