Immediately after announcing that the Singapore-Kuala Lumpur High Speed Rail terminus will be situated at Jurong East by Singapore’s Prime Minister Lee Hsien Loong, analysts and experts are already speculating and trying to pin-point the exact location.

According to them, the high-speed rail (HSR) terminus is likely to be constructed on a reserve site within the south-eastern part of the Jurong Lake District. The termial could be constructed on this 1.02 million square feet sized land which is located right between the Ayer Rajah Expressway (AYE) and Jurong Town Hall Road. This site is currently being used by the Jurong Town Council (JTC)’s iHUB, the Singapore Science Centre and the golf course of Jurong Country Club.

Other than being zoned as a reserve site under the Master Plan, a couple of plots adjoining to it has been planned for construction of hotels. 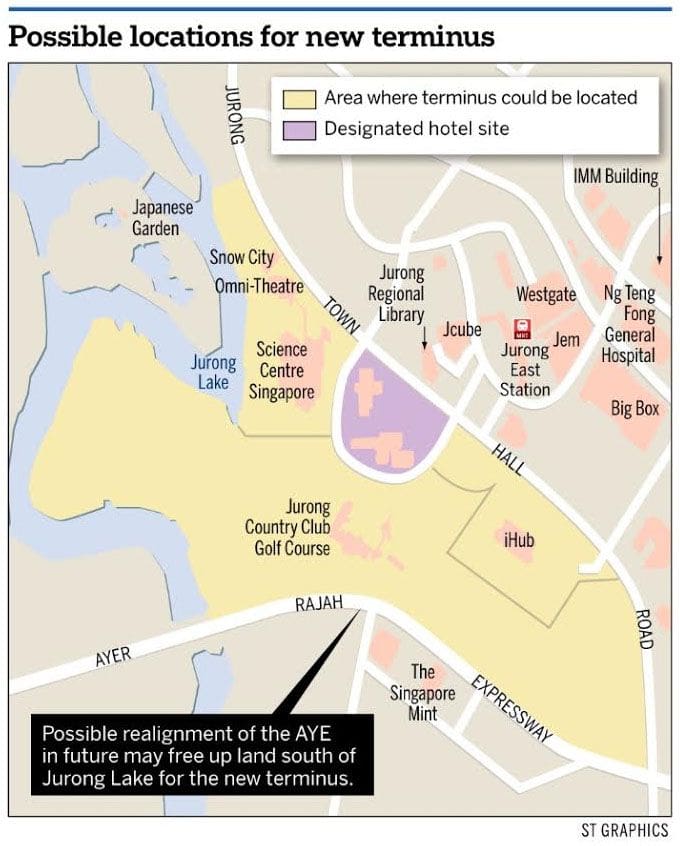 The experts has also noted that the Jurong East MRT and bus interchange, along with a 70-hectare Jurong Gateway commercial hub situated right outside this plot of land, make it an even more favourable location for the terminal to be built.

Ms Christine Li, Cushman & Wakefield’s research director has mentioned that in order for these planned hotel developments to bloom, there must be something to help bring in large number of people coming in Singapore, and the high speed rail is the key to this happening.

Also mentioned by PM Lee, the plan to bring in the HSR is to boost the government’s bigger picture – to turn Jurong East into the 2nd business district in Singapore.

Lee Der-Hong, the transport researcher from the National University of Singapore (NUS) said that due to the current condition that Jurong East is already densely populated by housing structures, therefore a couple more plots of land in the southern part of the Jurong Lake District are likely to be used for future developments. Also, the chances of this happening is even higher if the government decides to reorient the road stretch of the Ayer Rajah Expressway (from Yuan Ching Road to Jurong Town Hall Road).

Of course, every implementation or change will receive mixed voices.

Executive Director of SLP International, Nicholas Mak has said that just by having the HSR terminal in Jurong East is unlikely to help pushing the prices upwards for those properties within the district, despite strong sales being witnessed at Lakeville and the projected hype at Lake Grande.  He has quoted a few classic examples such as the Changi Airport, the Singapore Cruise Centre and the Tanah Merah Ferry Terminal, all having very little effect to boost prices of properties nearby.

Despite highly anticipating the HSR to materialise, a couple of dwellers in Jurong East have indicated their concerns regarding the potential increase in traffic, adding on to heavier congestion.

To ease this possible problem, Park Byung Joon mentioned that the government has already planned for 2 more MRT Lines which is set to offload some of the human traffic.

On a positive note, a couple of residents are looking forward to this new implementation as they can easily plan for a weekend trip to Kuala Lumpur, which only takes approximately 90 minutes.