DC rates increased by 22.8% for non-landed residential use The recent en bloc fever and bullish land bids by property developers have drawn concerns by Government and the Ministry of National Development (MND) has decided to raise the development charge (or DC) rates by a staggering 22.8% on average for non-landed residential developments – the highest rate hike for DC since 2007 when rates surged by 57.8% on average.

On the other hand, DC rates were also raised for commercial usage – by only a mere 2.7% on average, as compared to the 3.8% increase during the last round.

Rates remained unchanged for the landed residential and also the industrial property segments.

DC is a sum payable to the state – for property developers to enhance the use of certain sites or for them to build projects of bigger scale and the rates have risen in the range of 12% to 38% in 116 out of 118 geographical sectors. No rate changes were made to the 2 remaining sectors.

Analysts mentioned that the revision in DC rates was mainly due to the rising land prices paid by land-hungry property developers in both the Government Land Sales (GLS) and the collective sales segment. 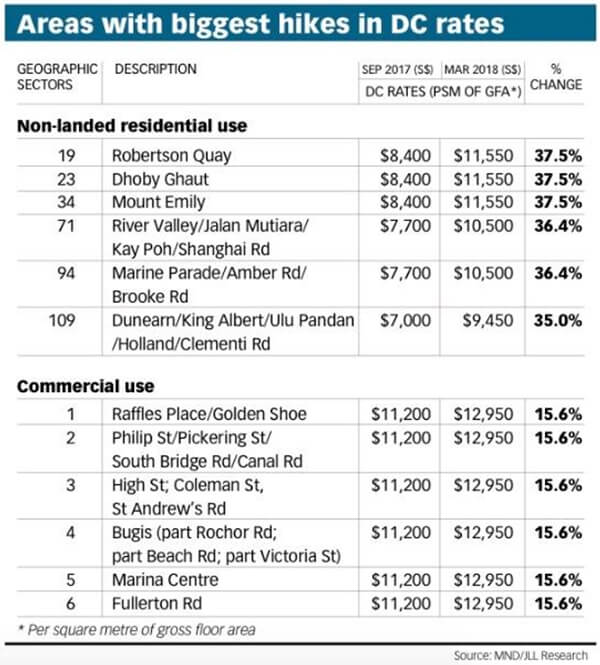 For instance, they noted that the DC rate increase in Sector 19 was mainly due to tender for the Jiak Kim Street GLS back in December 2017 – which was won by FCL for a whopping $1,733 psf ppr, and Sector 23 & 34 were mainly due to CDL’s acquisition of the Handy Road GLS site last month.

Some market watchers believed that the rate hikes are unlikely the dampen the buoyant mood in the real estate market at this point in time.

However, the steep increase in DC rates will eventually widen the expectations between buyer and seller for sites which bears a significant DC fee, and this could lead to a longer sales period for the future new launch projects on these sites.